An excerpt from Dan’s new book, 40 Years with a Whistle.

“You can’t see the picture when you are inside the frame.” ~ Les Brown

I love the phrase “the big picture.” In college, my friend, Crazy Jerry, encouraged me to take philosophy courses with Professor Johnson. Jerry wanted me to learn the work of Ludwig Wittgenstein and I needed more credits to graduate. Unexpectedly, Wittgenstein’s insights really prepared me for my life in coaching.

The first insight was that people can use words to mean anything they want.

Jerry and I would often dive deep into the waters of philosophy at social gatherings. (You can see why we didn’t date much.) When we went too far, Jerry would stop the conversation with an interesting insight:

“You have a Toyota in your nose.”

I didn’t actually have a Japanese car in my nostrils. He was making a key point that really helped me as a coach and trainer: We humans have this ability to push air up from our lungs, play with our vocal chords and lips and form sounds that become words. Sadly, this is goal setting for most people.

So, Mrs. Henderson, what are your goals for this year?

As we read in Hamlet: “Words, words, words.” When most people set goals, they have little ownership for what comes out of their mouths.

My follow-up question, “What do YOU mean by that,” has really helped me get people to actually own their statements.

But it was the other great lesson from Dr. Johnson’s Wittgenstein class that changed just about everything for me: the Family Resemblance Theory. Let me explain this.

My brother Gary has jet-black hair, dark eyes and is about my height, but weighs 70 pounds less. In fact, if you saw the two of us together, you would not think we were related. For those readers who don’t know, I’m blond, blue-eyed and built a bit thick.

When you go to your spouse’s family party and look around, you might see the same thing.

Although Professor Johnson didn’t use my family in his commentary, the moment he mentioned this, the light bulb went off in my head. It’s the “big picture.”

Let me give you another example.

Years ago, someone told me he expected fireworks when Mike Boyle and I were speaking together.

Well, it turns out that Mike does single-leg work and I don’t really emphasize it much. Literally, this person expected Mike and I to get into the corners, wait for the bell and duke it out.

These are the three things that are underappreciated in understanding good coaching:

Check out 40 Years with a Whistle
for a deeper look into these three topics and more
from my lifetime of being coached and coaching.

40 Years with a Whistle 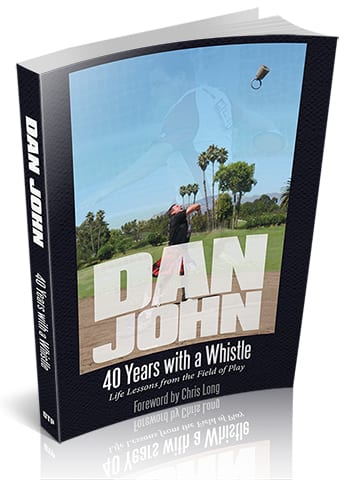 Dan John's new book, 40 Years with a Whistle, represents 40 years of coaching tips woven into a touching memoir of a coach's life.