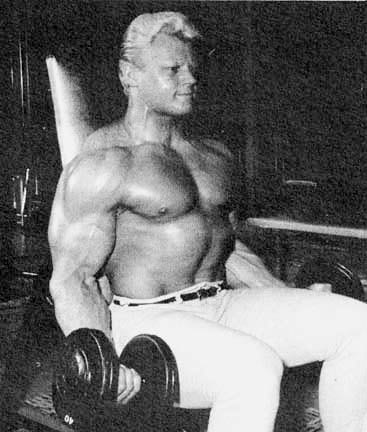 I have collected, over the years, an impressive file of tough workouts to review. You see, in nearly sixty years I’ve rarely missed one, and not one was easy. Training all out with meticulous form and mild sound effects always defined my style.

My most vivid tough workouts are set against the backdrop of the Muscle Beach Gym in the early 1960s. This famous, beloved relic, once located on the unspoiled shores of Santa Monica, was relocated by the encouragement of the city council to the underground basement of a collapsing retirement hotel four blocks inland.

A very long, steep and unsure staircase took me to a cavernous hole in the ground with crumbling plaster walls and a ceiling that bulged and leaked diluted beer from the old-timer’s tavern above. Puddles of the stuff added charm to the dim atmosphere, where three strategically placed forty-watt light bulbs gave art deco shadows to the rusting barbells, dumbbells and splintery handcrafted two by four benches and sagging milk crates.

You have no idea how proud I am to have this theater and the real life plays that unfolded day after day as part of my experience. It’s pure gold.

The magic didn’t come from the pharmacist; it came from the soul, the era, the history in the making, the presence of uncompromised originality yet to be imitated. 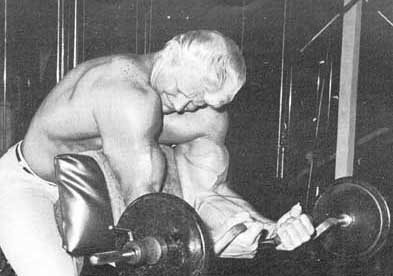 Those years I got to the gym between 5:30 and 6:00 am while the city slept, curiously content in getting a head start. By the time I left, perhaps three or four other creatures had descended the lonely steps to reluctantly take up arms.

I like the company I keep when I’m alone. I like the sounds of silence; I like the uncluttered space. With a crowd of one there’s no one to complain or groan, no self-consciousness, no dividing of attention, no one to impress. 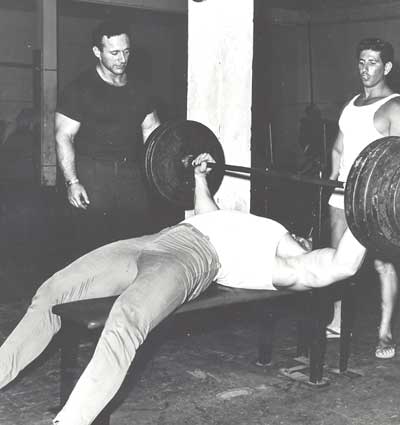 My workouts today bear a striking resemblance to that hardcore iron locomotion of years ago. Achievement and age instruct me to limit my workouts to five per week instead of six. Three days on, one off; two days on, one off is quite satisfying. Hammered joints and insertions convincingly suggest I use lighter weights and discard a pocketful of somehow replaceable exercises. I’m doin’ fine.

There was no glory except a rumor of respect and reputation among the underground bodybuilders and weightlifters. People in the real world sincerely frowned at us . . . a musclehead, misfit, a bewildered loser who’s harming himself and isn’t doing us any good either. 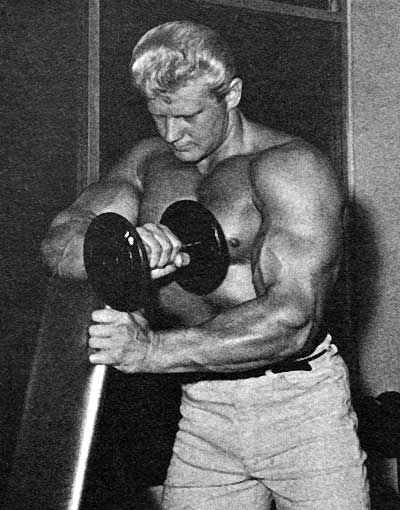 Man, has that concept taken a spin.

My toughest workouts took place in the middle of those formidable years way back when. I had training partners from time to time, and one in particular, Dick Sweet, pushed, encouraged and goaded me to those otherwise unapproached limits.

There existed on the far end of the caving rack a set of 150-pound dumbbells, awesome in length with pipe handles and suicide welds on the ends. These unwieldy contraptions could be further enlarged by strapping five-pound plates on either end with strips of inner tube. You got it—giant rubber bands. Getting them together took two guys, some muscle and engineering. Getting them overhead took temporary insanity.

We won’t talk about the sixty-degree incline bench of wood and ten-penny nails wedged against the wall. Never did get a good look at it in the dark. On the third rep of the third set, the rubber band snapped and slapped me in the face.

Some guy standing in the shadows snickered.

Shortly thereafter a five-pounder bounced off my forehead; I saw it coming. This made me serious. I had two sets to go and no more rubber bands. A short length of rope got me through the last two sets.

Did I tell you I was supersetting?

Workouts without supersets were not workouts at all. I was doing bent-over lateral raises with the sixties. The welds this time were on the inside of the dumbbells and were cracked, not dangerous but sloppy. Every third or fourth rep the web of my left hand between the thumb and the index finger got pinched in the crack. This, too, made me serious. 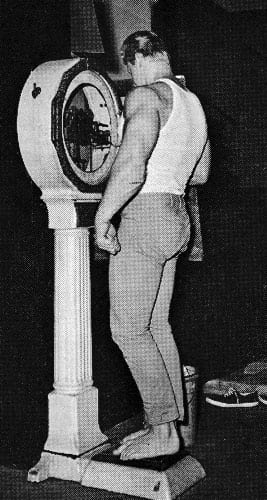 Good thing there’s not much nerve ending and the blood flow was light, or I’d have never finished my workout.

All I had left was upright rows with that rusty, comfortably bent bar over by the beer puddle, and side-arm laterals with the fifty-pound weights. The fifties were tight and balanced like trophies, the best in the house.

If you enjoyed this from Dave Draper, more history, storytelling, philosophy and motivation is in his new book, Iron In My Hands 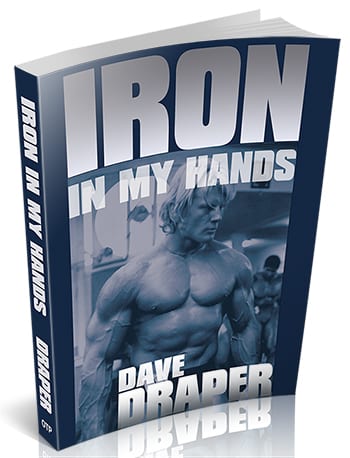