The oft-referenced goblet squat was created by Dan John to teach his student athletes how to squat well. They specifically teach proper form for Dan’s favorite, the overhead squat, helping the athlete learn to squat between the legs, rather than with the upper body stiff at the hips. It also works very, very well for teaching women how to squat.

You see, women have a hip thing going on, in case you didn’t know, and are for the most part more suited for front squats over the more common back squats. You guys trying to teach your spouses to squat should take note of Coach John’s handy goblet squat teaching tool. 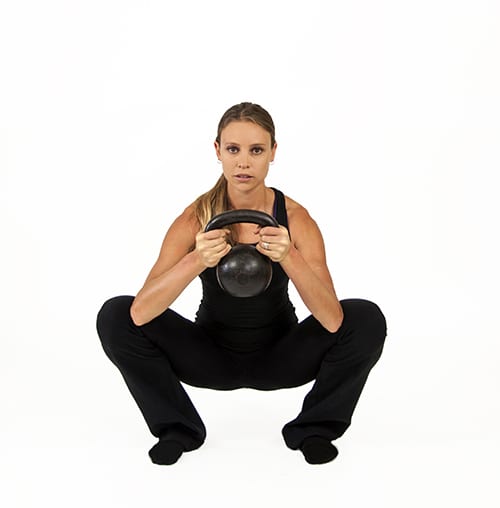 The goblet squat is excellent for teaching you to spread your stance and “squat between your heels.” The reason you squat upright with a goblet squat is because it’s basically a front squat. You won’t be able to duplicate that upright position with a back squat. Incidentally, if you are long legged, you might be better off focusing on the front squat rather than the back squat.

Many people took to them immediately, and use them regularly with a medicine ball instead of a kettlebell as a pre-workout warm-up, working the toes to the shoulders . . . scratch that, even higher. Gets that head in the game, too.

Once well into the warm-up, get and stay down at the bottom position, hold and stretch a little.

As an aside: A lot of people have a noisy knee thing going on. Fred Hatfield (you know him as Dr. Squat) discusses squats and knee issues here, and for an opposing viewpoint, let’s quote Coach Bill Starr about noisy knees:

“If they don’t hurt, I wouldn’t be concerned. I’ve trained with quite a few lifters who experienced noise in their knees when they squatted, but it never caused them any real trouble. Naturally, if they do start hurting, it would be wise to see a doctor.”

Your foot position—the width between your feet—is suggested by individual physiology, although one can adjust from the natural position and strengthen the supportive muscles in the process. For example, a natural position often involves a fairly wide stance, yet there’s a value in a narrow stance to strengthen the muscles around the knees. Don’t do much experimentation until you’re fairly proficient, completely warmed up (but not tired), or before your body awareness is well developed, because you’re more likely to train yourself right into bad form, straining your knees or low back if you’re not careful.

The natural stance of the goblet squat will ensure a more upright body during the downward motion. If you’re attentive to a straight-back position, a narrow-stance, butt-back goblet squat is perfectly safe and very effective as an exercise you might keep in the arsenal for years to come. 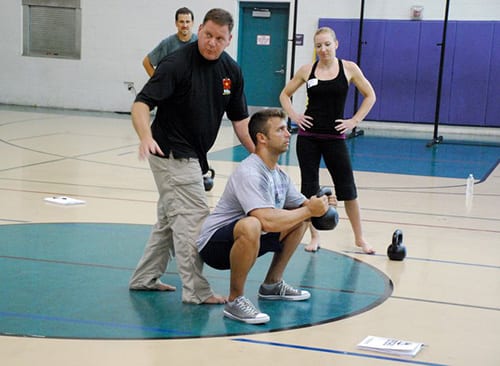 Back to the warm-ups, medicine ball goblets move agreeably to a clean from the floor/goblet squat effort that really gets the heart pumping and the full body working. Then you’ll be ready to move to goblets with a kettlebell by the horns—or a barbell or dumbbell, depending on available equipment. Once things get heavier, keep the reps at six or below because it’s an easy exercise to learn, but as one gets tired, things get sloppy and danger sets in.

Keep the goblet object close to your chest. Coach John points out that your elbows should be between your knees at the bottom, not on top or to the side of your knees.

When doing goblets with kettlebells, follow them or even superset them with swings. If using a dumbbell,  try pullovers after or between sets. These return the backside to an extended, upright position.

Want to really blast it? Superset your goblets with swings or pullovers and follow the whole package with elevated lunges. You won’t be forgiving Dan for a while. Ouch!

Here’s another thing: Because the weight used is so light, you can do these goodies with almost every workout.

While doing your goblet squats, drop down to rock bottom, rise back up to just parallel, then drop down again and repeat many times. Then, without rest and still maintaining good form, do step-ups while holding your dumbbell or kettlebell in the goblet squat position. Yow!

While developed as a teaching exercise, many of us—especially the women—may like to keep this exercise around for the duration. Meanwhile, here are a few more. . .

You can spend an afternoon over at Dan’s site for more unique training philosophy and techniques, here: Dan John’s website.

For a better understanding of all of Dan’s programming, review his books Intervention and its companion book, Can You Go. Better yet, here’s a discounted bundle containing both books. 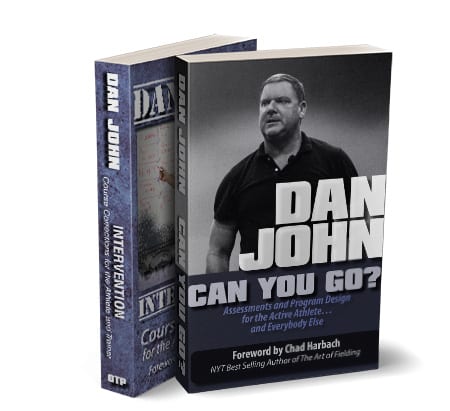