From the Couch to 1 mile or 1 kilometre

Home » From the Couch to 1 mile or 1 kilometre

by Greg Dea and Mitch Rowe

The desire to take up running is a good one. Honour it. There is a lot of information about how to run your first three miles or five kilometres (km), but often getting to the first mile or kilometre mark is the inertia that needs overcoming.

This early journey matters greatly for anyone beginning running or returning to running after injury. There are future livelihoods at stake when it comes to getting into shape – think about those civilians aiming to pass physical fitness tests for tactical professions like firefighting, police, emergency services and military. Some are given generic pre-enlistment fitness programs, like this one, to bring them up to a running capacity for testing.

What is different about this program is where it starts.

This program expects that the client isn’t currently running. Many of the currently available running programs are designed around tests that require a minimum of 1 km or 1 mile running tolerance – the maximum aerobic speed test (MAS), the YoYo endurance tests, the Shuttle Run tests, and others. But where does someone start when they don’t fit that criteria of being able to run 1 mile or 1 km? Right here is where they start.

That’s “the why” of this program, because there’s a gap in knowledge and experience being passed on for the first 1 mile or 1 km of running.

Each coach or therapist will have their own bias toward tolerance levels for what is considered success in a program such as this, and we would recommend a simple cut-point be that the individual can run continuously for 1 mile or 1 km. We have suggested that if the individual has had to start again, or start from not running, they would most likely finish this program running 1 mile in 8 to 11 minutes or 1 km in 5 to 7 minutes, even though we’ve given no suggestions during the program about speed or other measures of intensity. If an individual cannot run quicker than 11 minutes for the mile or 7 minutes for the km, it is likely there would be several risk factors present at pre-program screening that would contribute to this.

Further, each coach or therapist will have their own bias towards tolerance levels for what is considered efficient or safe for a program such as this. Our own bias is to be guided by a multi-factorial approach to identifying risk factors for future injury – our bandwidth or tolerance level is guided by strong research and wise practice.

A recent study highlights that the more risk factors a person has, the more at risk they are for future injury – in a mixed military population [1]. Since the population consisted of individuals in a wide variety of roles in the military, include a variety of combat support services, it is close to a general population. To that end, prior to starting a training program, we screen individuals using many elements that are also found in this study, with appropriate intervention afterward that have been shown to lower risk, either in group correctives, individual correctives, on individual treatment plus correctives [2, 3].

We would also be implementing, where possible, desirable and practicable, non-running physical preparation training in addition to this program. Where not desired by the client, possible or practicable, this program in isolation works well.

Now for the what and how – the program – concisely.

First, the “Couch to 1 mile” program:

Mitch and I have often considered a pre-program. Is it needed? The answer is, “it depends.” It depends on what you found in your screening. Each coach uses their own critical thinking to decide whether the week 1 load is doable. There are some clients who aren’t ready for straight ahead jogging, so if you are looking for a tried and tested program to bring a client up to week 1, try “phase 1,” directly extracted from my book, Return to Field Sports Running Manual.

Take a look at phase 1 for a pre-program.

Phase 1 is full of lateral movement drills, that is to say, a form of exercises that require you to move sideways. There are good reasons for this:

Drill 1: Side stepping, from walking pace to skipping – you choose the speed. There are three speed options:

A search on YouTube for side stepping drills will reveal many options, but my preferred drill for this running program is described very well by Aaron King Sports Training in this YouTube video:

A ladder is NOT required.

Choose a distance that is convenient, but between 10 to 30 metres is what I’ve used mostly, before changing direction. Keep moving back and forth within that chosen distance for 1 minute. Rest for 30 seconds. Repeat 3 times. This is written as:

Drill 2: Crossover stepping. This is also known as a carioca, or a grapevine.

You will move laterally while stepping one foot in front of and across the other, then alternating that with a step behind and across the other. A simple search on YouTube will reveal several videos, and again, I’m a fan of Aaron King Sports Training’s video:

As for drill 1, a ladder is NOT required.

For example, if you are moving laterally to the right:

• Begin in what is known as the base position—feet approximately shoulder width apart with a slight bend at the knees and hips—as if you are preparing yourself for a sudden command to commence;

• Step first with your left foot, across the front of the right foot;

• Next, step to the right with your right foot (you should be in base position again);

• Then, step with your left foot, to the right, behind and across the back of the right foot;

• And, step again with the right foot, to the right, to return to base position.

• Repeat this alternating crossover pattern, one-in-front, one-behind, for the prescribed distance and time.

You may progress from a walking pace to high speed.

Drill 3: In and out agility drill.
In this drill, you will need the same distance – 10m to 30m – preferably with a line drawn on the ground to guide. You will move laterally to the right in this example. Before I explain, consider that this drill is often known as an in-in-out-out drill. A quick search for “in & out agility drill” or “in in out out” in YouTube will usually yield some examples such as these by iTrain Hockey and Aaron King Sports Training at:

You won’t need an agility ladder as in the two videos linked. A field line is all that’s required.

• Start in a base position, behind the line.

• Step over with the right foot first, then left, then step back over the line with right, then left.

• Continue this four-step while moving laterally.

In the early phase, the above three drills can be done at a walking pace. They can even be done in an aquatic environment to reduce load on the body.

If you don’t tolerate forward and backward movements yet, you should limit participation to the first two drills—lateral and carioca/grapevine.

If you don’t tolerate rotational movements initially, you should limit participation to the lateral movements and forward/backward movements.

Typically, everyone can laterally step at a walking pace when they aren’t injured or suffering a neurological condition, in which case all three of these drills can be done at least at a walking pace.

Stay in phase 1 and DO NOT PROGRESS to the next phase if the following occurs:

Next, proceed to their follow-up artice, Beyond the 1km: Using a three-speed approach to get to 5km.

And check out Greg’s book, Return to Field-Sports Running Manual, available in ebook format and paperback. 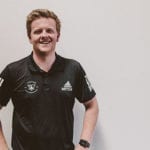 Mitchell Rowe is a strength and conditioning coach currently working as Head Coach at Virtus Human Performance in Victoria, Australia. Mitch has worked with a wide range of people including the general population, weekend warriors, aspiring youth and semi-professional athletes, as well as professional athletes.

Mitch spent the inaugural year of St Kilda Football Club’s AFLW Team in the role of Assistant Strength and Conditioning Coach, fuelled by his passion for female athlete development and sport.

With a Master of Applied Sport Science, Mitch has a strong desire to learn, grow, and develop, so he can share his knowledge and experience with his clients, athletes, and graduates in order to assist in shaping the future of the industry.