Asymmetries in movement are bad, right? Not always. In this clip, Greg Rose discusses FMS scores and when you absolutely don’t want to see perfection.

Excerpted from Gray Cook and Greg Rose: Three Principles You Can Apply To Any Movement

That’s how we’re scoring them. It’s simple. By the way, what’s better? There are seven tests. If you get 3 on all of them, that’s a total score of 21.

A higher score does not mean it is better. It depends on what are we trying to do.

We do some of the testing in the NFL combine. We do the FMS and we analyze the data for some of the teams. Gray said we have players that come in and they’ve been training to get a 21 on the FMS.

Did you know, if you’re a quarterback and you get a 21, we’re not interested in you.

Did you know that?

We call them medal brackets in the Olympics. If you throw the javelin and you are outside of that 14-16 number bracket, there’s no way you’re going to win a Gold medal.

There are asymmetries that you should have had by training that would keep you in this bracket and if you go above that, you definitely are not training enough. If you go below that, potentially you could get damaged. You can get injured. We like to keep you in that sweet spot.

It’s really a challenge to keep people in that medal bracket. In golf, we call it the jacket bracket.

It’s amazing how many people train for the FMS and they come in and peg a 21 and they just knocked themselves out of what we’re looking for.

More on the philosophy behind Functional Movement Systems from Gray Cook and Greg Rose:

Gray Cook & Greg Rose: Three Principles You Can Apply To Any Movement 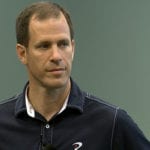 Greg Rose is a board-certified Doctor of Chiropractic with an engineering degree from the University of Maryland. Greg is the co-founder of the Titleist Performance Institute. He’s also one of the developers of the SFMA and has worked with thousands of golfers over the past 20 years.