It all began so quietly. The men started to assemble in the cool of the evening. The sun set over the horizon of the Pacific and the soft blue of the evening was beginning to accept the blackness of night. An ocean breeze drifted across the sands of the beach and wound through the crooked little streets of the city. The lights in the homes and apartments flicked on as the windows of the hippies’ pads glowed with crazy hues of blue or red bulbs and the sounds of hard rock music fought those of Lawrence Welk.

It was night in the city of Venice. Still they came. First there was Zane. He quietly nodded to Zabo, who was sitting behind the desk, and went upstairs to the dressing room. Soon Franco and the current Mr. Belgium, Serge Jacobs, arrived.

Draper was next, followed by Eddie Giuliani and Mike Katz. After a few minutes, Don Peters came in and within seconds, Arnold arrived.

Gold’s Gym was now busting with championship lumps. Already at work was Ken Waller, who is one of the most massive bodybuilders of all time. The cannon was loaded and was ready to explode.

All this concentration of bodybuilders was for the sole purpose of getting ready for the big contests in New York. With the exception of Waller, all the others were IFBB bodybuilders and were stomping like mad bulls for the tension of the big event.

Already Zane and Jacobs were working abs. This would last for as long as an hour and a half without rest.

Arnold and Draper went over to the squat rack in the corner. They started loading the bar, which was already bent from the tons of weight it had been forced to carry over the years.

Katz took some dumbbells from the rack and started blasting away at his delts. Columbu was on the calf machine lifting a stack of weights that was almost taller than he, while Don Peters was warming up with some light presses.

What made the whole scene a little scary was the almost unearthly quiet that seemed to descend. Everyone was concentrating on what they were doing. This was serious business and there would be no useless rapping this night.

I looked over at Arnold, who was heavily clothed in a sweatsuit. The stains of sweat began to show under the arms and around the chest.

Dave slapped more plates on the bar. Now it was his turn. Again and again he went down to the full squat position, only to fight to stand. Arnold leaned forward with each rep and counted them out.

When it seemed Dave would burst if he made one more effort, the Oak would lean even closer to the Bomber and say, “You can do it, Dave. You can do it.”

Then as if in some kind of hypnotic state the mighty Draper thighs would ram out another rep.

“Do another one, Dave,” said Arnold softly, another rep done.

Then it was Arnold’s turn and he worked until his thighs looked like they would split his pants. There was no resting between the supersets, then both Dave and Arnold started doing sissy squat moves on the hack machine. All that could be heard was the clank of Olympic plates and an occasional yell of encouragement.

“Dick,” said Arnold finally, “I think my thighs are going to come off my legs. They feel so heavy with blood. Tonight we are doing torture routine number two.”

“Why do you call them torture routines?”

Arnold looked at me with baleful eyes under his brow, now dripping with sweat. “What else would you call a routine that makes your whole body scream for relief, that makes you want to vomit or pass out from exhaustion?”

“Your turn,” said Dave as he got off the leg curl machine.

By this time Mike Katz was doing presses behind the neck. He was seated on a back-supported bench and ramming out reps that forced him to grind his teeth until I thought I saw the enamel crack.

Zane and Jacobs were still doing situps. I got seasick just watching them.

“Do another set,” I heard the familiar voice of Arnold roar from across the gym.

For a moment I thought he was urging Dave on. Instead it was aimed at Don Peters on the preacher bench. Don was standing in a pool of sweat. I could see his muscles twitch involuntarily.

“You want to kill me or something” he asked.

“If that’s what it takes for you to win the Mr. America this year, yes.” He couldn’t have made it much plainer than that.

“Okay, but I have to take a rest first.”

“No,” said Arnold as he turned back to the calf machine for another set, “you wait too long.”

Don shook his head in disbelief and went back to another set of curls.

By this time the whole place was chugging away like a steam engine. I’ve never seen anything like it. There were more shouts of “Go, go, go!”

I got up on the stairs that lead to the dressing rooms. From the balcony I could see the entire gym. Everyone was now dripping with sweat. Great pools of it seemed to surround each apparatus. The smell was getting pretty musty. The yelling was increasing with the clanking of the plates. Nostrils were flared, eyes were wide and staring, teeth were grinding, blood vessels looked like they would burst and steam was almost seeping from the floor. For a moment it reminded me of Dante’s inferno. No money on earth could make men toil in a hell like this, but they were doing it all for just the glory of a few minutes on a posing dais.

After the workout Peters and I walked toward his car.

“You come here every night?” I asked.

“Yes,” said Don, “but it’s worth every long mile. I found myself getting in a rut. I had it pretty soft. I had a whole house to train in with a pool outside and soft music on the stereo. It was pretty great if I was training to win the Mr. Pismo Beach title, but not for the Mr. America. In order to have the kind of muscle that wins the big titles, you have to suffer. It’s not suffering laying by a pool and listening to the stereo playing Doris Day or Johnny Mathis. No one ever won a title with those two as training partners.”

As I was driving home I began to think back on my bodybuilding past. I began to wonder if I could have ever won a physique title. Maybe, I thought, if I had really tried. I turned on the car radio. It was Doris Day.

No, I guess it’s best I stuck to writing.

Here’s another excerpt you’re sure to enjoy: Afterword, Mr. America 1965. 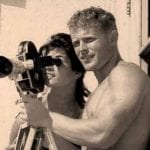