We occasionally get questions from our readers looking for an article or lecture to start their new discovery. A recent customer wrote to ask about breathing assessments and wondered if we had some good links to get him started. During the final segment of the Assessing Movement video, there are 23 questions from the audience. This one covers breathing assessment, so we picked it to address our writer’s question. 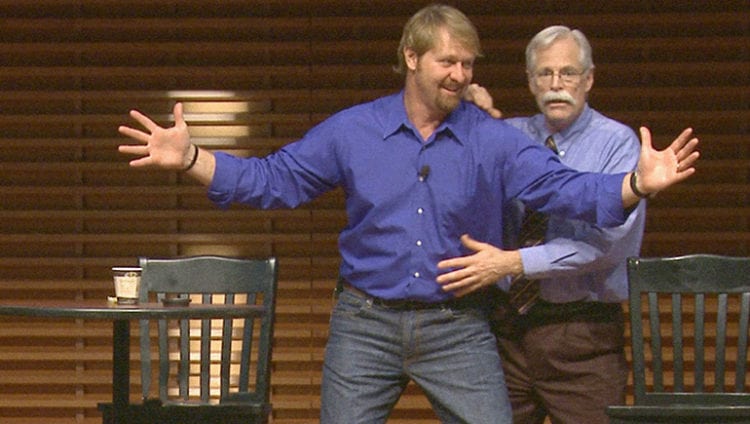 Question: How important in your view is the breathing strategy in functional movement? Do you test it or try to change it?

We’ve been looking deep into breathing for quite some time. Taking breathing to the point of a screen before we go into an assessment is probably a more prudent thing to do.

The first order of business we’ve got to deal with in breathing is to start measuring certain levels of efficiency, long before we start poking around in somebody’s ribcage or diaphragm.

If somebody screens poorly, the first thing we need to do is see if there’s a structural problem. If a person has a compromised airway and we try to coach or train using postural cues, exercise and loading or bracing like a Valsalva with a big lift, we’re going to create significantly more problems than we solve. First let’s ensure we don’t have a structural limitation we can’t overcome.

Secondly, I don’t try to coach breathing in the FMS. I just watch. When we get into doing an exercise, I’m very aware of breathing. One of the things we start teaching when we’re doing a movement pattern in our SFMA clinical model is whether the person can cycle a breath in a movement pattern.

Sometimes I say, “Touch your toes,” and people are all the way down there touching their toes and then I say, “Now, take a breath,” they may have to come off their toe touch to breathe and then go back down. They don’t own that motion because they can’t breathe down there.

Getting that anatomical airway off the grid so it can have appropriate therapeutic intervention is the most important factor. If we get too overzealous screening breathing without good functional metrics, we’re going to try to alter something without having enough feedback.

I don’t disagree with that, but let me expand on the theme. To answer that question, it depends. If we’re just creating some patterns you want the person to use in daily living—free breaths, you should follow what Gray just said.

Let’s raise the stakes a little. Consider an athletic competition where your athlete has an opponent—mixed martial arts or UFC. These guys are so good. If they have their opponent in some sort of a compromised position and they want the arm down, they’ll dig the opponent’s liver to get a defensive arm down. They wait for the second for the opponent to inhale—not exhale—and then snap on a submission based on that breathing cycle.

How would we engineer that to other contexts? Watch basketball players under the basket. They’re waiting for that breath to go down and the second that breath goes out, there’s a little bit of laxity and they create a shiver and break that guard.

How would I make sure that never happens? How would I teach the diaphragm to be as athletic as it possibly can, independent of stability and control?

I get them breathing heavily and drop them into a side bridge. If they entrain any of the other muscles to the breathing, they’ll fall out. All they have left is the diaphragm. I’m going to teach that diaphragm to be independent and allow them to breathe no matter what.

Heavy lifters better not breathe during the lift. They fill their lungs to about 70% of capacity and then they’re done, they’re clean and they’re ready. They’re weighing the bar, the elasticity of it—the tone, the pulse out of their hips. They may sip a tiny bit of air. Then they fire, because if they let any more air out of the lungs, the spine will collapse.

Again, I’m just providing different examples of why ‘it depends.’ There are three scenarios and three completely different instructions for breathing.

I was watching one of the Williams sisters play tennis and the announcer says, “She’s intimidating her opponent with the grunt.” That has nothing to do with intimidation. If we measure the speed of the serve and the power out of the shoulder joint, we learn it’s active expiration.

When we measure core stiffness, it doesn’t occur when the lungs are full of air. Maximum core stiffness occurs with active expiration just at the beginning. That initial exhalation overdrives the core, locks it down and creates a measurable super-stiffness.

Super-stiffness means that even more of the athleticism is expressed on the distal side. They fire and serve a few more miles per hour. That’s the grunt.

This was an excerpt from the Q&A segment of the Assessing Movement video featuring Stuart McGill, Gray Cook and Craig Liebenson. Click here for more information about the video and a set of preview clips.

Our OTP library on breathing topics is really fleshing out lately. Here are a few articles and products related to breathing drills and assessments that will help with your study.