This quick video from Charlie Weingroff shows us a few variations on using Reactive Neuromuscular Training in designing a corrective exercise program for dysfunctions of the deep squat pattern.

When you correct the squat, everybody’s happy and it looks impressive, etc. So, let me just run through the different options that you have for RNT.

DJ, let’s get your feet just outside of your shoulders, put your arms up into a letter ‘Y’ and let’s see where your squat is at.

Maybe his arms come a little bit forward, but it’s still a 3.

If you see people have both knees turn in, here’s your fix. (Wraps band around back of knees and crosses in front, pulling from front.) Now squat. Good.

You are exaggerating the mistake. You are demanding that the knees stay turned out.

If you see it only on one side, but not the other, you’re only going to pull one. (Wraps band around outside of right knee and pull from left side.)

Go ahead, squat. Maybe this is the person you see who has some kind of knee surgery a long time ago, and one side doesn’t like going by the rules. Let’s go again. He has some different control issues here. Let’s try one more with the chest forward. Okay.

When you see people squat off to one side—they have poor weight shift—I’m going to pull them in that direction and make it worse.

Come on back up. I’m going to pull him to the left, now come on.

I hope you guys have seen this stuff before: Feed the mistake.

Question: Do you pull from the hip?

I’m right on my hip. I don’t want to be on soft tissue and catch his ribs.

For people who have a hard time sitting back (keep in mind a lot of these fixes also work for deadlift—they work for anything) I’m going to go under his butt and have him squat. I’m assisting the pattern; it’s easier for him to get down.

Some of you saw when we assisted the deadlift . . . it got easier as they were able to figure it out.

T-spine . . . If somebody is pitching a little bit. We saw his arms come forward a little.

Option 1 is to put the band on like a backpack and I’m going to give it a tug from in front of him and have him squat. You’ll see this one work for guys, whereas the knees will work for girls.

Go ahead and squat again. Good. We’re not done up top. I can put the band in his hands and anchor it low in front of him. Go ahead and squat. So, now I’m getting the whole upper quarter, T-spine, scaps and glenohumeral, whereas putting it on like a backpack was just the T-spine.

More on correctives and the design of corrective programs
can be found in Charlie Weingroff’s Training=Rehab, Rehab=Training: 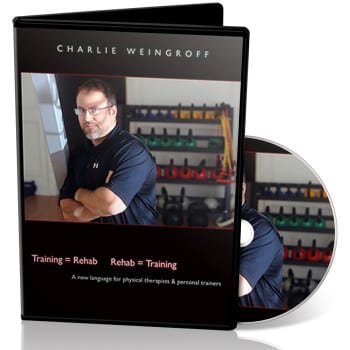 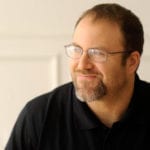