This video clip and transcript from Dan John gets you to think about the gaps in your training and why what you’re not doing may be your biggest obstacle.

Time will magnify all of your idiocy.

Time will magnify all of your gaps and omissions from your system.

My personal story: In probably my first 10 to 12 years of weightlifting, I never squatted, but I did a lot of curls and a lot of presses. I was this magnificent beast at 162 pounds when I graduated from high school. That’s right.

That’s 2.5 pounds a week. Go grab yourself 2.5 pounds of hamburger patties, slap them all over your body and you’ll see the change in weight.

Why did it work?

Because I had never done an authentic squat in my life. I had trained and trained. I would train six, seven and eight times a week in the weight room, but after a while never made any progress because time was magnifying my omissions.

Years later when I started doing the loaded carries, the farmer walks and stuff, I noticed very quickly I was throwing the discus just as far as I ever had, with less time in the weight room.

I had missed and had gapped loaded carries.

Time is going to magnify the mistakes you make. Time will magnify them.

That’s why the six-week thing is such a big issue. What you’ll see a lot of—and we’ll come back to this and go through in great depth—is:

Two Weeks to a Tighter Tummy,
Four Weeks to Bigger Biceps,
Five Days to a Happier Trapezius . . . whatever.

You’ll notice those programs always circle around about six weeks, but time will magnify what you skip. Over time, literally over a decade in some cases and over a few years in others, what you’re not doing is going to be the issue.

Check out A Systems Approach to Coaching and Training: How to Create a Holistic Athlete to hear more from Dan John and Chip Conrad 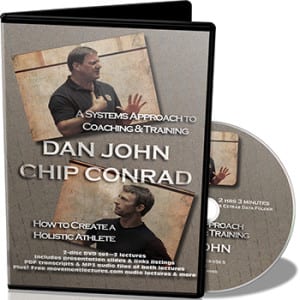 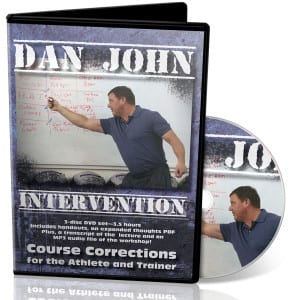 Save on this Lecture Bundle from Dan John