Training wisdom from Dan John: strength coaching athletes isn’t always about the weight room. Sometimes you have to get inside their heads.

Once we move that athlete up 10 years later, we grow them out.

Ten years later, we might do what we call arousal training. Arousal training involves my athlete sitting a chair and me yelling at him and saying terrible things about his family, his girlfriend, and all of his friends.

I’m trying to break him mentally. We might have a 45-minute workout—a throwing workout—where he doesn’t get out of the chair.

“I saw that panic—why did you panic?”

“I know it was stupid. What happens at track meets?”

“Sometimes they say that discus is going to start at 10, but it starts at 4.”

“How do you deal with that?”

When you’ve got a 22-year-old discus thrower, you might do high volume, high load Olympic lifts. That’s not appropriate for a 12-year-old.

You might want to do advanced recovery techniques, cryotherapy, or massage might make a difference.  You’ve got a guy who’s benching 400 and throwing the discus 10,000 times in a year, you might want to spend some time working on the shoulder.

Nutritional tweaks. The best thing I’ve ever done for throwers, it’s called the eat-like-a-man diet, or the anabolic diet. Five days zero carbs, two-day carb up. You want your guys throwing on the fifth day of zero carbs, then give them mass amounts of coffee, because you want to be, “You okay?”

After they throw, you give them beer and cheese pizza and pancakes.

You don’t want that kid throwing then.

Like what you’ve seen from Now What? . . . and wondering, now what?
Here are a few more clips: 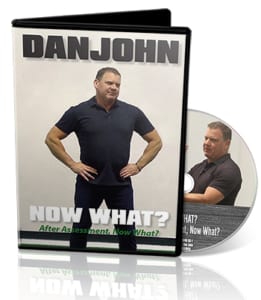