Eric Beard categorizes the musculature of the thoracic spine, discusses the different muscle groups and how they can control safe range of motion or contribute to stress and strain.

The local musculature is also going to be lower force producers made up of a higher percentage of Type 1 muscle fibers—great for endurance, low force production over long periods of time. Sometimes these are called postural muscles.

The global musculature has higher levels of force production and a higher percentage of Type 2. Sometimes, Type 2X muscle fibers produce force at a higher level, but there’s not a lot of sustainability with that.

I live in a suburb of Boston. When I’m in town and I’m looking at a subway stop, it’s a local stop—stop-to-stop—versus one train that might go from city-to-city. I’m talking locally from stop-to-stop.

If we think about the control they have and the local musculature, they control what’s called the neutral zone. It’s not like a neutral zone infraction—like in football where’s someone’s offside or not the neutral zone in hockey because you’re moving blue line to blue line, but it’s the center of space that’s safe to operate within. It’s an area where there isn’t going to be an unnatural or unnecessary force going through a disc or compression on a nerve or pinching of a facet joint.

This neutral zone is a safe area of motion we have throughout the spine. They way in which one vertebrae attaches to the spinal column and to the next vertebrae, there’s this oscillatory space. There’s this movement in all directions that’s safe. Movement is okay, but if we go outside of the neutral zone, that’s when we can start to stress and strain discs, put pressure on the spinal column and pinch facet joints and cause stress to the cartilage and ligamentous tissues. The outer range of motion is controlled by the global musculature, the bigger ranges. If we’re talking locally, it’s the smaller segmental or neutral zone control here. 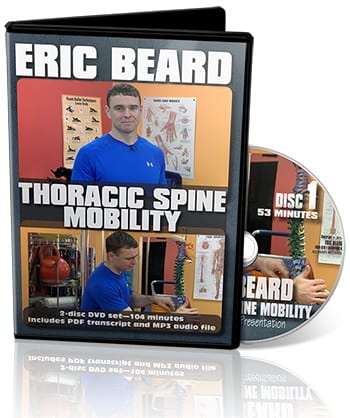 Eric Beard is an NASM certified corrective exercise and performance enhancement specialist. He's a subject matter expert for Life Fitness Academy, and works with athletes on performance, individually or in teams, with patients coming out of rehab, as well as with clients looking for personal training or corrective strategies.