“Hey Eric, I’m contacting you because a parent recently asked if I could work with her son who has autism. I really want to, but I have a few questions. I found your info and was wondering if you could help?”

That’s representative of 98.8% of the questions that I receive from trainers and coaches.

It wasn’t always that way. This is a shift.

Ten years ago, even five, I wasn’t inundated with requests from fitness professionals. It is a welcome change on two fronts:
Trainers are now coming into contact with people on the autism spectrum . . . and,
Parents, family members and educators are beginning to consider the value of physical activity for a population that desperately needs it.

The need is clear. The whys and hows are where the bridge requires building.

The ‘article-sized’ autism overview goes as follows:
Autism Spectrum Disorder (ASD) is a neurobiological disorder affecting 1 in 68 children in the US (statistics are similar for other industrialized nations) and likely the same number of adolescents, teens and adults (many of whom remained undiagnosed because of earlier and more rigorous screening). Autism is referred to as a spectrum disorder because symptoms and affect can vary widely from high-functioning individuals to those exhibiting severe cognitive and behavioral deficits. The most pervasive characteristics of ASD are difficulty socializing, deficits in contingencies (if/then relationships), repetitive or stereotypical behaviors (OCD tendencies), rigidity with schedules and activities and, as is increasingly evident, deficits in gross motor functioning.

Individuals with autism demonstrate rigidity with routine and activities. New situations, however enjoyable a quality they may hold for the neurotypical population, may be aversive simply based on their novelty. Those on the autism spectrum may repeat words or phrases (often from TV or movies) out of context. Some may even repeat specific words or phrases that seem nonsensical when they are excited, anxious or upset. Understanding the individual and his/her lexicon and behavioral repertoire is a key factor in positive outcomes for instructional sessions of any kind.

Enabling people with ASD to engage in more (and better) physical activity should be an assumed good, however this is subject to the ‘Playground Conundrum.’ If I dump the contents of my ‘Big Green Bag of Awesome’ (hurdles, med balls, sandbells, cones, fitness rope, resistance bands, etc.) on the playground, neurotypical children ages two-to-10 will gravitate towards the pile like gleeful little magnets. This hard-wired play-seeking behavior, so common to the normally-developing children, is typically absent in those with ASD. 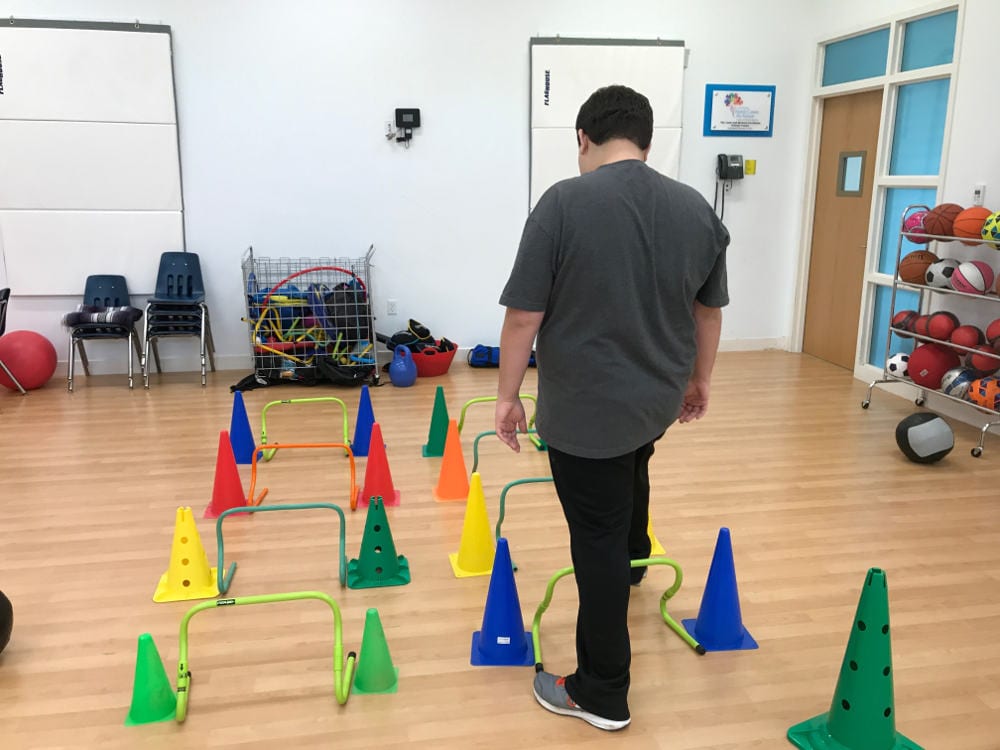 As coaches, therapists and fitness professionals we may have an outstanding program template and variation after variation of exercise options, but initially, we must understand that the physical aspect of performance is the least important aspect for our athletes with autism.

This is why we have to consider three aspects of ability:
Physical
Adaptive
Cognitive

Physical is all about what the athlete is capable of doing. How well can he/she squat? Do they need a regression or can we progress to an external load?

Adaptive functioning refers to motivation and is absolutely key to success in fitness programming for the ASD population.

Assessing cognitive functioning provides us insights on how to coach and cue an athlete to be successful with an exercise as efficiently as possible.

Individuals with ASD can get off-task. They may be just starting or in the middle of a set and lose focus or wander off. In the following video, one of my athletes exemplifies this in his own unique way:

Developing and implementing successful (meaning effective and reinforcing) fitness and adaptive PE programs for the ASD population requires strategies for each aspect (physical, adaptive and cognitive) of performance. While each can be assessed and programmed for individually, they are all interrelated. If I am teaching an overhead press to Adam, the weight of the Sandbell has to coincide with his current level of strength. Adam also needs sufficient motivation (adaptive functioning) to perform the overhead press. If the overhead press itself is not reinforcing enough, I have to provide some type of contingency; First he performs ten overhead presses and then he can have a break. The athlete’s learning style is going to determine how we coach each exercise. Mirroring or guiding the athlete by performing the movement in front of them may work. 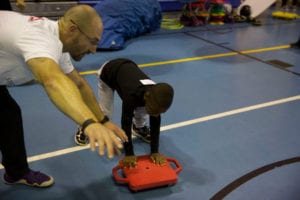 Sometimes we have to provide a kinesthetic or physical prompt. Many individuals with autism have deficits in kinesthetic/spatial awareness and require this additional prompt to perform the exercise safely and efficiently. Marissa may be perfectly capable of full extension with a 10lb overhead press, but she needs some extra guidance at the elbows to lock out the movement.

Fading physical prompts as quickly as possible is important for independent mastery of the skill. Having to provide a hands-over-hands prompt when teaching a medicine ball push throw gets tedious rather soon. Having a strategy in place for fading or eliminating that prompt enables the athlete to master the skill while still performing it to their current level of ability and being reinforced for doing so.

When the weight and repetitions of the press coincide with Adam’s current skills, the reinforcer (a “fainting” break, his combination of crashing to the gymnastic mat and lying face down) is sufficient for motivation, and the coaching/cuing aligns with his learning, a direct route to achievement and progression exists. An exercise that an athlete can perform (physical) independently will likely be more motivating (adaptive). The athlete also understands the expectation for the exercise (cognitive) and the contingency between performance and reinforcement (cognitive/adaptive).

Human beingness is the nifty commonality between the autism and neurotypical population. Even when considering the neuromuscular issues inherent to the disorder, we are still working with a human body, focusing on fundamental movement patterns. Our athletes should squat, pull, hinge, push, locomote and carry heavy stuff around. A strength program for a general population athlete and one with ASD may seem remarkably similar. They’re going to squat, press something overhead, pick something up, pull something to them (or themselves to something) and spend a few quality minutes crawling around on the floor. Their level of skill with each particular exercise will dictate the progression or regression.

With the ASD crowd, we spend a lot of time in Regression Land (brochure on request). They will likely need an elevated object upon which to squat. A hand or two may help guide them through full ROM on an overhead press. Those same hands may provide some upper back stability and localized cuing (back and shoulders to remain upright) when performing a standing resistance band row. They’ll need a little extra prompting and a little less intensity. Of course, the plan is to eventually invert these.

Regressions allow our athletes progress in each of the three areas of ability (physical, adaptive and cognitive). When Chris is working on squats he may need an elevated surface (my go to is a 12” Dynamax or similar medicine ball on some cardio step risers). As he becomes more proficient with the exercise, we can begin to eliminate a riser or two for a lower squat. This enables a strategic progression and maintains the integrity of the exercise. While becoming better with the squat, Chris is doing a lot of squatting, becoming more familiar with the exercise and, perhaps, motivated to perform more repetitions.

The scenario on paper is quite often different from that in three-dimensional real-life reality. Athletes with autism, nuanced as they are, may be completely cool with an overhead press on Monday and that motivation grinds to a screeching halt on Thursday. We need to invoke the power of the two Cs: Contingencies and Consistency.

Contingencies are if/then relationships, a particular point of difficulty for many on the autism spectrum. Contingencies arise in social and work/educational/Activities of Daily Living (ADL) situations. They apply to our fitness sessions when our athletes are not motivated to perform a particular exercise or activity. Supplying a secondary reinforcer (the thing they get or activity they get to do after completing the exercise) can increase the motivation to complete the target exercise. Just about every other Wednesday, Chris wants nothing to do with squats. But if I incentivize it with the opportunity to play the “Cone Game” (knocking over multicolored cones with a medicine ball), he’s more likely to squat without much protest.

Contingencies are key in structuring programs from an adaptive perspective. Anxiety tends to run high in the ASD population, often due to unawareness of expectations or what will happen next. Clear expectations—“First ten squats to the ball then you can have a two-minute break”—can alleviate anxiety and provide order for the athlete. As these contingencies become consistent, the athlete can self-regulate better, knowing that performing his/her bear walk will result in access to a preferred activity.

Providing fitness programs for the ASD population can be challenging, nuanced and quite often entertaining. At the top of all the conceivable adjectives is necessary, as inactivity and a high risk for the medical complications that result from a sedentary lifestyle are becoming part of the ASD landscape. As part of the youth population, they need fitness programs that meet their needs and abilities and that will provide real world significance. 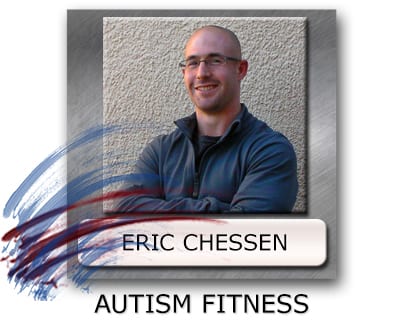 We're all familiar with autism from a distance, but have you considered adding an autism fitness program to your youth training business? Do you have enough knowledge to help your friend or relative with an autistic child's fitness needs? Autism fitness expert Eric Chessen gives us an overview of his thinking in this lecture on working in fitness with people of all ages with autism. 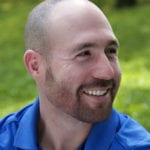 Eric Chessen began working with autistic kids as a camp counselor. After that introduction, he combined his background in fitness, his graduate schooling in psychology and his training in Applied Behavior Analysis to develop a successful fitness program for children with autism.