Most of the scrutiny and debate about the Functional Movement Screen is on the FMS scoring system. Gray Cook wonders if people are missing the point of what the screen is ultimately meant to accomplish.

Most of the scrutiny and debate on the Functional Movement Screen is on its scoring system; we convert a movement pattern to a number because it allows us to cleanly talk about it.

If we take away the scoring, what do we have?

We have people who pass a pre-participation physical who still have pain with movement. We have people assuming they can use a fitness solution on a medical problem. Take away all of the numbers associated with the FMS scoring, and simply say “People getting ready to move should move here before they move over there,” and we’re going to find that many of these people are actually in pain.

That pain is going to either cause them to compensate, avoid a pattern or have inappropriate motor control. The exercise you’re getting ready to dump on that pain-based pattern is probably going to be a risk factor in itself. If you do more on a painful pattern, I don’t know if it’s going to get better.

People have debated the numbers of the FMS considerably more than they have its utility. If we disregard the scoring criteria, what two things happen with the movement screen?

Let’s take the movement screen and turn it into a pass-fail test. Take the numbers out of it. I want you to see what the guys who developed this platform see. All we’re doing is scanning that piece of paper looking for ‘0s’ and ‘1s.’ That’s all we’re doing.

We’re working it from the bottom—not the top.

In this instance, an optimal movement by definition is acceptable and an acceptable movement is also acceptable. Let’s take away the ‘3s’ completely. You’re either really good, you’re okay or you fail.

It just became a pass-fail test.

Look what just happened to the scores. You’re adding them up wrong. It was never made to be a total score test—‘0s’ and ‘1s’ on each individual pod in the movement screen are what give you your direction. 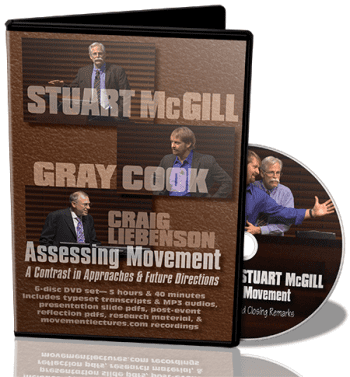 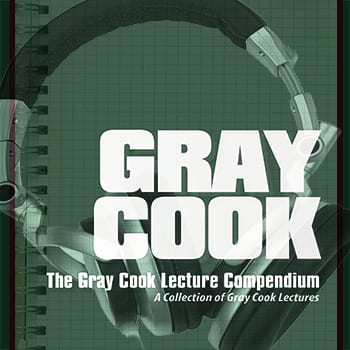 This is a complete set of Gray Cook's recorded audio lectures, collected and reformatted into an audio OR edited transcript ebook. If you would like to order BOTH formats, put both items in your shopping cart. A 10% discount will automatically be applied.