During the first four weeks of strength training, your cellular metabolism and cellular structure don’t change. What happens? Movement learning happens . . . if you give it time.

When your stabilizers efficiently align your joints better, there’s less sloppiness in your joints. There’s crisper coordination and crisper contraction. There’s a good chance you didn’t get stronger in your prime movers. You became more efficient in your integrity, and efficiency is another way to get stronger.

There are a lot of people who have enough strength to muscle through sloppy moves, but there’s also room for improvement if they don’t get one bit stronger.

You can have the biggest strength gains you ever will when you introduce a new move and hit it for four weeks. Yet if we do a tissue biopsy, we don’t see a big difference in your muscle.

When you get to this part of the test on the NSCA examination, you’re supposed to call this neural factors.

What we are all admitting right off the bat is there’s a significant amount of inefficiency in the system. Long before tissue needs to adapt, the neuromuscular platform—your timing, coordination and motor control—will refine itself.

What’s the role of the coach here? Tell a lot of jokes. Smile a lot. Remind them to breathe.

Make sure they know what they’re doing and then keep things light. They’re going to have enough anxiety without you telling them to engage something. The movement should tell them what to engage.

If Brad doesn’t fall over in his chop or he doesn’t know he’s fallen over, the first thing I need to do is make him aware. “You’re falling over, Dude.” But I’m not going tell him this by saying it. I’m going to show him by narrowing his base.

Now he stops chopping so he doesn’t fall over. I want him to feel that, because making those minute corrections is what motor development is about. Self-correction is how we advance a stage.

There are two books you should read. One is called The Talent Code and the other is Talent Is Overrated. They explain the idea of putting you at the edge of your ability in a rich, sensory environment. 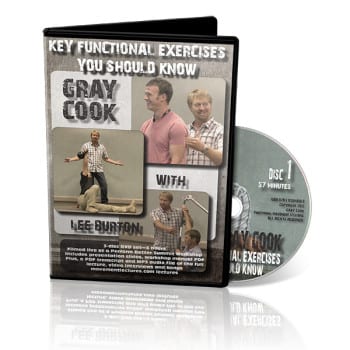 Get results for your clients in less time and with less work by focusing on the key functional exercises Gray Cook reveals in this video. You'll also learn when to use them and how to modify them according to the needs of each person.