What’s your corrective strategy to get proper core firing? From rolling to crawling, Gray Cook gives his program to get everything firing in the right order.

If you had to correct his rotary stability and we had a room over there with all the equipment Perform Better has, Brett and I are going to give you 12 minutes. You have to come back here with symmetrical rotary stability.

What are some of the things you would attempt here?

Would you just practice the test? Would you do some type of core engagement?

Are side planks coming out because you’re at a loss?

You have to change that pattern. That’s the competition for all the trainers and coaches in this room. Everybody gets a clone of him. You get to train him for 12 minutes. We want you to come back and demonstrate the rotary stability clean.

Corrective strategy should give you feedback that quickly.

A lot of people want to do a single correction and have it fixed forever.

A habit is making that. A habit is going to break that. I have to do the correction until I can backload some strength onto it.

Somebody give me a corrective suggestion real quick.

Wood chop or our spiral and diagonal patterns? The only thing I would say is that a wood chop is a half-kneeling or tall-kneeling pattern. It could definitely change that, but following a developmental strategy, what is the lowest position that I could take into?

There are ways to look at his left-right rolling where this same thing could be magnified. He may be a good enough and strong enough individual, and if you put him in half-kneeling, you might not see it.

With a guy this big and strong, if you put him on wood chops, he’ll figure out how to cheat that in about three seconds. I don’t use these diagnostically unless one of the upper patterns, like lunging or hurdle stepping, says I have to go there.

What did I tell you guys to watch out for? It’s the person who can do a ‘3’ on the push-up, but not ‘3s’ on the rotary stability. That person has a lot more core strength than stability.

Stability is motor control. You guys are still thinking, ‘How am I going to get his abdominals active?’

I’m not. I’m thinking, ‘How can I get the lower ones—the deeper ones—coordinated so they fire before the big ones?’ If all he has to do is plank and push-up, he can kick anybody in this room.

Your first weight shift in the crib looks like rolling. It is a precursor to your reciprocal patterning in your crawling and your walking. Simply lying and rolling one way or the other, we have specific ways we do this to lock up all the unnecessary variables. Rolling strips all of the prime movers away and exposes a motor control issue.

The reason I wouldn’t go to rotary stability if his shoulders and active straight-leg raise weren’t at least ‘2s’ is that rolling is going to be complicated by a mobility pattern and not motor control. But let’s say you’ve done your work; you have enough mobility. If you can’t roll to one side or have difficulty there, but can roll to the other side, we capture the motor control issue. Once we capture it, we can train it right out.

The way we’ll know if we’re on the right track is to retest. If you change it, move on. Add something else to it. One of the things we could add to it once we got rotary stability—one of the things I do with a lot of my big, strong athletes who lose that inner core—is to do some bear crawling.

Bear crawling is huge, but we don’t go there with an asymmetry.

The getups are a good supplementary. Do one week of getups and one week of bear crawls. I think they’re going to be complementary. If you’re strict enough on your getup, you’ll probably notice an asymmetry, a glitch or a struggle. Patterning that out and working on that will fix it, but so will the bear crawling. Bear crawling, by the way, is on your feet and hands—not on your knees. 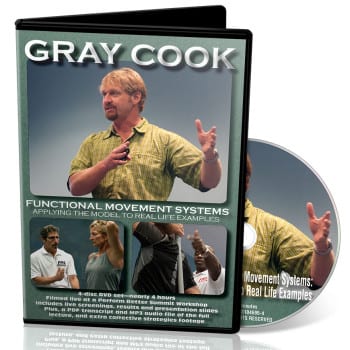 In this presentation, Gray Cook and Brett Jones will show you how to correctly apply the FMS with your clients and use it to develop programming unique to each person. Gray and Brett take people through the screening process, and afterword they give their corrective and programming recommendations so you can see exactly how experts use the FMS. 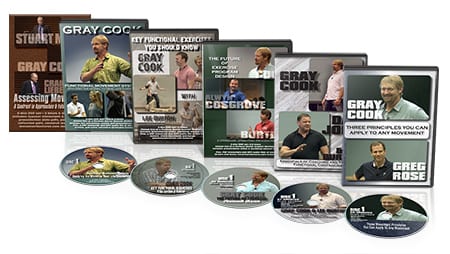 This bundle is a full set of On Target's Gray Cook videos, and is a fabulous way to get caught up with all of Gray's current thinking.