Iron Tamer Dave Whitley talks kettlebell wrist position, pain compliance and why ‘goosenecking’ is a good thing for your rack, press and getup.

The question: “Do you crush-grip the handle?”

Not only do you crush-grip it, but you slightly gooseneck your wrist as well.

Why do you do that? Remember earlier when we were standing in the rack and Rif (Mark Reifkind) was talking about the importance of pressing from the elbow and keeping the forearm aligned vertically?

You guys saw Logan bending some steel tubes during the break . . . Logan is a pretty strong guy. I’m going to have him stand in a rack position to illustrate an important point about wrist alignment.

What we run into all to often is wrist dorsiflexion. I’m going to take two fingers and he’s going to lock in the rack position, but keep an outward bend to his wrist. Watch this (Dave bends arm down).

Now, bring it in with a straight wrist. Lock it in tight. (Dave can’t bend arm using two hands.)

What’s going on there is, neurologically, your hands, feet and face have a lot of sensory input stuff going on. If my brain reads from my wrist that it is bending outward under weight, my body wants to go with that force to avoid damaging my wrist.

If I take Robert, and I put him in a armbar . . . he goes with me. Right? It’s called pain compliance. He will go wherever he needs to go to rescue that elbow. The same thing is going on with the wrist. If this wrist bends out this way, he will go with it. It’s reflexively wired into you, and if you fight it, you wind up getting hurt.

Sometimes, that can be consciously overridden . . . if you know what you are doing.

Sometimes, it’s not a really smart idea to consciously override your own defense mechanism.

We want the wrist straight. With the kettlebell resting on the back of the forearm, a slight gooseneck will allow the wrist to be pulled into a straight position. Does that make sense?

Plus, if you are goosenecking, you are probably going to be crush-gripping too. That gives you that good vertical alignment from the elbow to the forearm. Bruce Lee said, “There are no wrists in boxing.” We adopted that in kettlebells.

Want more of the Iron Tamer’s Lessons of the Old-Time Strongmen?
Take a look at the Reifkind-Whitley-Reifkind bundle: 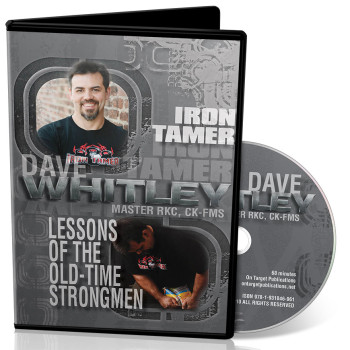 Dave Whitley, the IronTamer, is a coach, speaker and performing strongman. He works out of his Nashville facility, Nashville Kettlebell, where he works with clients to feel better and get stronger.