Evan Osar: Low Back Pain – The Myth of The Weak Core – Part 1

Low Back Pain
Your client, Sheila, a healthy 38-year-old single professional, has been mentioning to you that she has had low back pain for the past few weeks. Up to this point, she was still making her regular training appointments, but she is now beginning to cancel and miss sessions due to her chronic discomfort.

You evaluate Sheila’s program and feel you have been doing a good job working her through a corrective and progressive core strengthening program. You have also been paying attention to her posture and giving her home correctives, including stretching and strengthening exercises. Not knowing what else to do with her, you refer Sheila to her physiotherapist.

Sheila emails you an update: her physiotherapist informed her that she has a weak core and needs to do more core strengthening exercises. While you feel like her program has a strong core foundation to it, you begin incorporating more planks, chops, and kettlebell carries to her program.

After several weeks Sheila is still experiencing low back discomfort, leaving you both frustrated and confused.

It is often believed that structural or mechanical low back pain (LBP)—low back pain stemming from a structural/mechanical cause such as injury or trauma to the disc, joint, ligament, muscle, or fascia—is related to a weakness within the core. Early in my career, I unfortunately perpetuated this industry-wide myth when I often wrote and lectured about the ‘weak’ core and its contribution to LBP.

In this article, I am going to discuss the myth of the weak core and introduce the idea that structural/mechanical LBP has more to do with an individual’s core stabilization strategy rather than their overall core strength. I will also introduce an easy to implement assessment that will enable you to determine, with good accuracy, whether or not your client’s low back issues stem from a strength deficit or rather from a non-optimal core stabilization strategy.

A follow-up article will discuss how to use corrective exercise to improve your client’s core stabilization strategy. 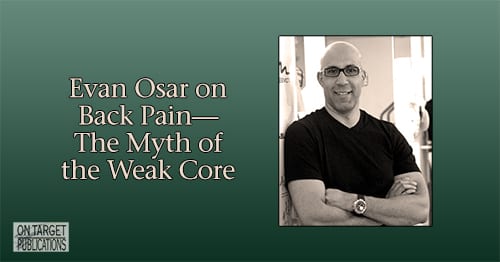 The Myth of the Weak Core
The myth of the weak core has been perpetuated for as long as the topic of the core has been discussed. There are indeed some individuals who I would consider to have core weakness. I have worked with many individuals, diagnosed with multiple sclerosis, Parkinson’s and other neuropathologies, who do indeed demonstrate core weakness. Some inactive seniors and individuals who have been bedridden may demonstrate a certain level of core weakness as well. Rarely do I see individuals without a true underlying neurological cause walk into my clinic with what I would consider core weakness. To the contrary I believe that many of these individuals are experiencing the ramifications of a non-optimal core stabilization strategy rather than core ‘weakness.’

As previously mentioned, early in my career, I too thought that a weak core contributed to the LBP of my patients. However, after successfully helping my patients and clients achieve a stronger core, I didn’t notice an appreciable change in the incidence of LBP in my practice.

In my early career, I would see mostly sedentary individuals presenting with LBP. Later, I began seeing more active and relatively healthy individuals coming into my clinic with LBP. Interestingly, the majority of them were doing regular core strengthening programs.

After treating thousands of individuals with LBP in my clinic, I began to wonder if they really were experiencing symptoms related to core weakness. I identified several inherent problems with the concept that a weak core was contributing to my client’s LBP. I began to focus on three significant issues within the idea of the weak core and its contribution to LBP.

The lack of viable answers to these questions was eventually the springboard for my journey into understanding why so many of my clients experienced LBP.

It was after many years of studying and truly looking at how my clients were moving that the reasons for structural low back pain started becoming clear. When I began watching how these individuals moved, I noticed fairly common traits in individuals that were experiencing LBP.

I noted that individuals with chronic LBP:

Unfortunately, very few of the core assessments I was performing at the time were actually looking at the strategy (how the nervous system coordinates posture, muscle activation, respiration, etc. to produce efficient movement) the individual was using to complete the task. This suggests that the majority of these tests were actually functioning more as a screen rather than a true assessment: many individuals were passing the tests although they were doing so with a compromised strategy. In other words, the individual had the muscular strength or endurance to complete the task—for example, hold the prone bridge (plank) position for a period of time. However, they were utilizing a non-optimal strategy (for example, moving into posterior pelvic tilt and lumbar spine flexion or compromising their breathing) when performing the test.

These findings led me to develop a series of assessments that focused more on the quality of the movement during the test rather than whether or not the individual could complete the test. The benefit of this type of interpretation is that it provides the tester with information about the individual’s strategy for stabilization and movement rather than simply evaluating whether or not they have the ability, strength and/or endurance to complete the task.

The Wall Lift Off Test
Although this test will actually be challenging for most individuals to perform, I consider the Wall Lift Off Test (WLOT) a relatively a low-level core assessment. In comparison, the Prone Bridge Test (holding a plank position for time) or an Overhead Squat are much higher-level assessments because they require a significantly higher level of core activity and coordination. I have found that lower-level tests such as the WLOT provide more accurate information as to an individual’s strategy because they will highlight how the individual is performing what should be a relatively easy task to complete. It is generally easier for the individual to compensate by bracing their core and, in essence hide their compensations when performing a higher-level test such as the Prone Bridge Test than during lower level assessments.

This test has demonstrated excellent reliability across a wide range of populations from sedentary to extremely athletic individuals. Even ‘strong’ individuals will have a hard time beating this test because the tester will be observing the strategy for lifting the legs versus whether or not the individual is able to complete the task.

Wall Lift Off Test: Start (left); Finish (right).
There should be no change in alignment or ability to breathe during the test.

Interpretation:
With an optimal core stabilization strategy, the individual should be able to lift both legs off the wall while maintaining:
Their alignment (no rotation, extension or flexion of the spine or pelvis),
Tone of their abdominal wall (no distension), and
An optimal diaphragmatic breathing pattern.
Additionally, they should be able to have a conversation with you while in this position indicating they are not holding their breath or bearing down (Valsalva’s) during the assessment.

Here’s a video demonstration of the test:

If the individual can hold both their legs up and off the wall, this indicates to you that their core is strong enough to support the weight of their legs. Inability to maintain optimal alignment and breathing during the WLOT is rarely an issue related to not having enough core strength. If the individual demonstrates any of the above signs, this indicates that their low back issue is more likely stemming from a non-optimal core stabilization strategy rather than having a strength or endurance deficit.

The best, or rather, most effective core exercises are the ones that enable the individual to maintain optimal alignment, three-dimensional breathing and myofascial control throughout the pattern. The exercises being used are less important than the strategy the individual is utilizing to perform those exercises. Choose exercises that allow your client to successfully align, breathe, and control and you have given them the framework for developing and maintaining an optimal strategy. I will discuss this concept further in part II of this article.

Is this differentiation between strength and strategy important or is it simply a semantics argument?

I believe it is important to differentiate between strength and strategy as a contribution to structural LBP because if strength is developed on top of a non-optimal strategy, any deficiencies become exaggerated—ultimately setting the individual up for greater issues. Additionally, if a patient or client is told they have a weakness they will likely undertake a core strengthening program with very little chance for improving their core stabilization strategy, which is the most common reason they developed structural/mechanical LBP. Conversely, if the individual develops a more optimal core stabilization strategy then they will have created a foundation for success and any additional strength gains will enhance rather than detract from their performance.

Conclusion
Structural/mechanical low back pain is a common issue affecting much of our population. Many individuals suffering from low back pain are identified as having a weak core and therefore instructed to undertake a core strengthening program. This article has discussed the challenges of the notion that a weak core contributes to structural low back pain. As part of a comprehensive assessment, the Wall Lift Off Test provides a method for differentiating between an individual’s core strength and their core stabilization strategy as a contributor to their low back pain. Several common signs were discussed for identifying when an individual demonstrates non-optimal core stabilization.

If the individual demonstrates any of the aforementioned signs, then the primary rehabilitation or training goal becomes to help them develop a more optimal core stabilization strategy. In part 2 of this article series, I will discuss and provide examples of how you can help your clients or patients develop a more optimal strategy while safely and effectively strengthening their core. 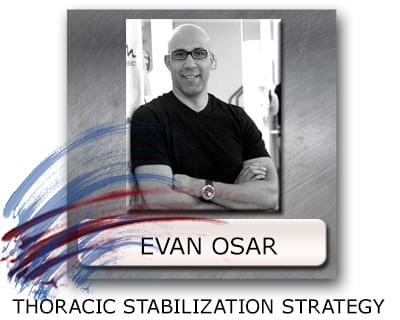 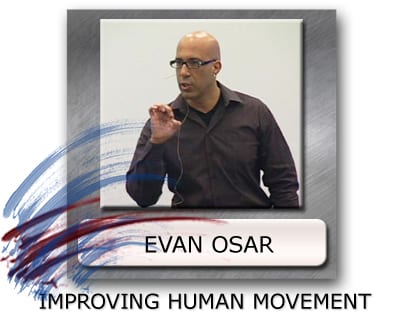 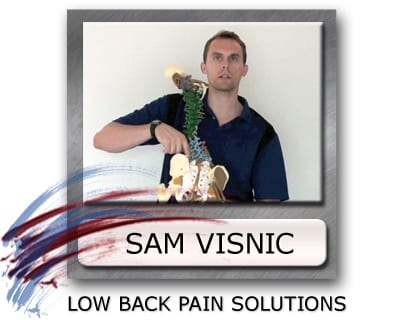 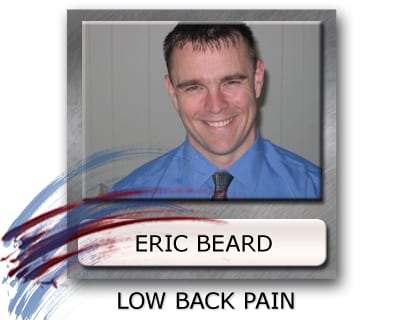 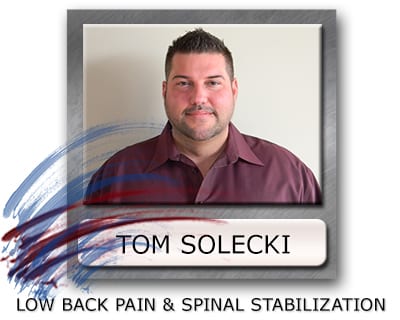 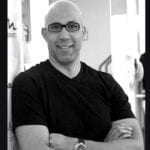