The Turkish getup is one of Gray Cook’s Key Functional Exercises You Should Know from his video lecture of the same name—the other exercises he breaks down in the video are the chop & lift and the deadlift. At the end of the session, he offered a time for questions. The following are a few that came up—these are common TGU questions, so we thought you might want to see the answers. 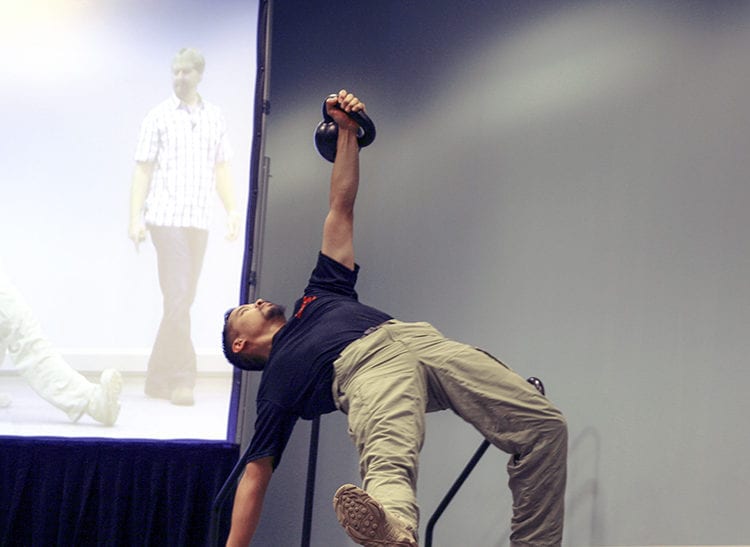 Question: In the getup, what’s the importance in how we come back down? People can get up with competence, but seem to lose it on the way back down.

Gray: When I’m coaching in that situation, I think of a couple of things. If I had been a little tighter in coaching your ascent, you wouldn’t have gotten into a position of compromise. If I let you skip by without integrity—and remember, if we’re doing it ourselves and somebody isn’t coaching us, we can easily cheat our way up—when we’re going back down, that’s eccentric. Sometimes even though we’re stronger, eccentrically we have less proprioception and less feedback.

There are a couple of things going on here. The form they get up with may not be impeccable and could be forecasting they’re going to have a problem going back down. Secondly, if they get so fatigued going up that there’s no cheese left on the cracker to go back down, we have a problem there too.

In most cases, we don’t run into the problem of good ascent and poor descent because there was an issue. However, sometimes people are good enough athletes or strong enough where they bent their elbows, change positions and re-extend the elbow. They’re going to run into a problem on the way down simply because they don’t have as much available modification. If they’re cheating on the way up, they’re going to have problems on the way down.

If you’re doing sets and repetitions with good motion, you’re going to have a bigger problem going down because it’s going to get hard. First, you’re already pre-fatigued. Second is that awareness—your eyes are involved from the ground up, whereas on the way down when you’re stepping back blindly with a foot, you’re going to have some issues. 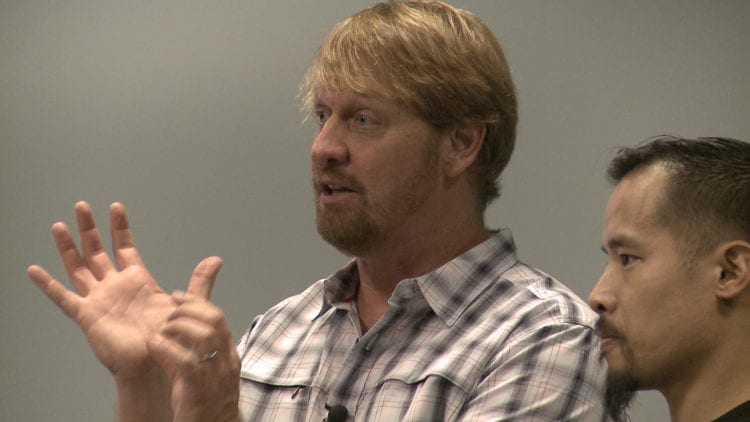 Question: When transitioning from the elbow to the tall sit, what’s the appropriate placement of the hand?

It’s the same with the feet. You have support underneath you in every step along the way. If you find yourself sliding all over the place, that’s an indication you don’t have enough control or enough stability.

Gray: You’re going to have to make modifications. I have a wrist that no longer extends. If I try to force it into extension, I’m going to wind up with another surgery. I can’t do getups with a high bridge anymore, not because my hips can’t handle it; I just can’t go 90 degrees on my wrist. I readjust my right hand at each position to make sure the next transition goes well.

It’s contextual. You’re going to have someone with a long torso and short arms or long arms and a short torso. What you’re looking for is that packed alignment. You’re trying to keep those shoulders out of the ears. If the elbow or hand position causes that, it’s already wrong. Sometimes it’s just changing the position—not so much engaging your lower trapezius. Heck, just changing your elbow position makes it look better. You’re not stuck in those positions. 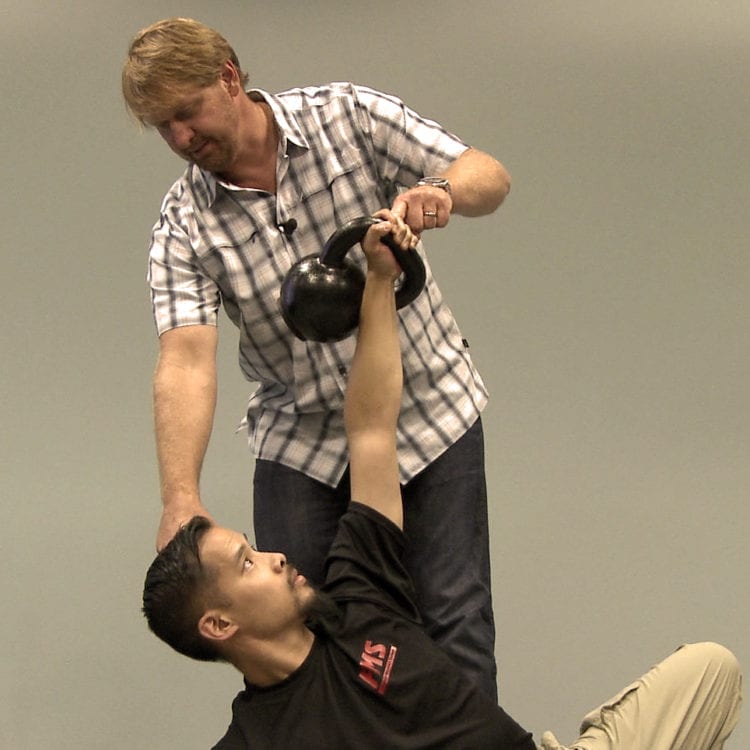 Question: What we’re hearing is looking at the neural patterns, beginning to understand to teach everybody—how this isn’t just a good exercise. It’s not intended to be an exercise in itself.

Gray: In and of itself, no. It demonstrates the fundamentals that are used everywhere else. There’s one element in this a lot of people missed. Doc gets this because of his background in fighting.

Making both hemispheres of your brain work together in exercise is very important. That’s why balancing is sometimes very challenging because the left and right brain enjoy working in isolation. Any time I cross the midline, I’m creating a little bit of a dilemma. One side of my brain likes to do a lot of stuff and one side doesn’t. Whenever I cross the midline, my hand leaves this visual field and goes into the other visual field. The arm actually crosses over and I have to make my right arm work over on the left side. That creates quite a bit of mental fatigue.

You’re going to find the Turkish getup—or stuff like swinging Indian clubs or paddling a standup paddleboard—produces this overall mental fatigue. Where did that come from? I just want to sit down. I’m not burning. My arms and legs didn’t give out. I have just been totally engaged.

That’s one thing I want you to walk away from this lecture with.

When we choose these self-limiting exercises—whether it’s balancing on a slackline, paddling a standup board, doing a single-leg deadlift or a Turkish getup—these are not options for you and your iPod. You need 100 percent of your attention onboard.

This is a mind-body experience where you’re going to get dialed in within a very short amount of time. If you try to watch TV or carry on a conversation while doing this, you’ll still get good at it, but you’ll never get as good as you could, because this is total engagement.

We want you to use full engagement to overcome movement dilemmas. You cross the midline numerous times in the getup—whole neural pathway concept is huge in getups. It doesn’t matter how many you do, but if you do a bad one, your brain will remember that one as easily as it does the good ones.

Precision, quality and owning each stage of the getup is much more important than how many you do and how much you lift. This doesn’t line up with a lot of the ways the getups are often used, but the people who brought us this brilliant move from combative arts and exercise probably didn’t use it the way we are.

Take a minute longer and watch the preview clips of Gray Cook’s Key Functional Exercises You Should Know.