Lacking core stability? Then you’re likely down on power. Here’s how Gray Cook discerns if it’s a breathing sequence problem.

All right. You need a pretty good core for that, whereas he got a D minus on his core. He’s got a lot more kicks in him at that speed or he’s got a greater speed kick.

When he’s kicking, where is he getting his power?

When you punch, where’s the power coming from? It’s still coming from the floor.

Every piece of power he’s got either comes up one leg, through the core, and acquisition to the other leg or up the back foot, through the core, and to the fist. Everything you’ve got is going through your weakest link right now, and you have to compensate. You have to bring a lot more prime mover into your kick because your stabilizer isn’t there.

This is different than just doing a breathing session, which is extremely liberating if you’re stressed out but it isn’t going to change his push-up. I’ve got to take him to his biggest movement compromise and watch the breathing mistakes there. Then, we’re going to attack them right there where he can truly appreciate that. 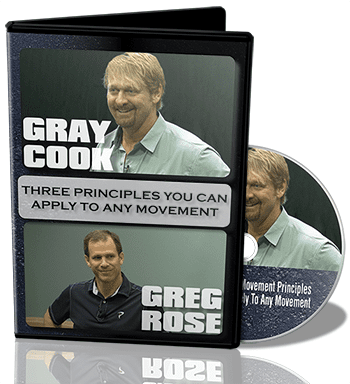 Gray Cook and Titleist Performance Institute's Greg Rose take over four decades of experience working with people at all levels across multiple sports and condense it into three powerful movement principles you can use to analyze and improve any movement no matter how simple or complex.