Heart Rate Variability (HRV) helps us make training decisions, and I’m going to give you an overview of how that works. But before we get to HRV, we have to take a short side trip to discuss allostasis.

Once you understand the principles of how it works, a lot of the training pieces will start to fall into place and you’ll see why the HRV technology is so powerful.

Allostasis is closely related to the concept of homeostasis. Homeostasis drives the body to maintain its internal environment regardless of what we throw at it, and allostasis is how the body does that.

The body has a lot of feedback routes. It has a lot of control and regulation to make sure that doesn’t happen. Allostasis is how it goes about coordinating all these responses to make sure everything stays in the expected ranges.

A body has to maintain its internal environment to be able to produce energy. It’s always striving toward maintaining an environment of energy production. Its underlying biological drive keeps us alive by producing the energy our cells need to function.

How does allostasis work?

Allostasis is mediated by the brain. The brain is the puppet master whose purpose is to train and regulate everything that we hope leads to muscle growth, fat loss, training and performance. It’s the brain in control.

The brain is constantly making adjustments and adaptations to keep you in the state it wants you to be in to maintain energy production. Anytime you push against that, your brain will push back to keep you out of a stressed state.

Training is nothing more than controlled stress.

When we look at why the body does what it does, what its biological drive is and how it’s most likely to respond, we can start making more than random training guesses—we can make educated guesses.

When we use technology like HRV, we can make well-informed decisions about what kind of training a person needs because we have an idea of what the body is ready to handle. We have some idea of the expected outcome.

How does this fit into training?

We consider allostasis from two points—first from the training day and then how it applies toward repetitive training—what I call the training continuum—and how the body adapts to training over time.

Training is like a targeted application of stress designed to challenge homeostasis and to push against that to elicit a particular response. We challenge aerobic energy ability so the body will respond by improvements in aerobic energy. We challenge the muscle fibers’ ability to produce force and power, so the body will improve its ability to improve force and power, either by building a bigger muscle fiber, or by changing neurological control and coordination.

There are two parts to that process, the general response and the specific response. The general stress response means no matter what training or stressor you impose, there’s always the same pattern. The nervous system always activates in the same way.

For someone who’s running the marathon, lifting weights or sprinting, more energy has to be produced than is produced at rest. Because of that, there’s a whole bunch of stuff that has to happen. Hormones like epinephrine, growth hormone, norepinephrine, prolactin, testosterone, cortisol and more kick in to do a job to produce more energy. All of these hormones have a role.

During exercise, the role of cortisol is to create energy and to help support the body in producing more force. Without cortisol you wouldn’t be able to do this. It’s part of a stress response.

The specific stress response component is simply the part where we see differences in how the body responds based on the type of stress or training. If we have mechanical stress in the form of lifting weights, sprinting, plyometrics or something that’s a very high level of mechanical loading, we’ll see a different response than if we challenge the body in a metabolic way. If we challenge its ability to produce aerobic energy for an extended period of time, we’ll see a different form of stress.

There’s always some level of both mechanical and metabolic stress. The differences lead to different outcomes. There are very specific components that have a body response based on the type of stress, but there’s also a general response that happens no matter what the person is doing.

In the big picture, that’s the process of training. The body figures out what we did to it and responds. It responds so it’s better at it the next time, and you disrupt homeostasis less in future events.

That’s the basis of the training continuum: Repetitive stress. 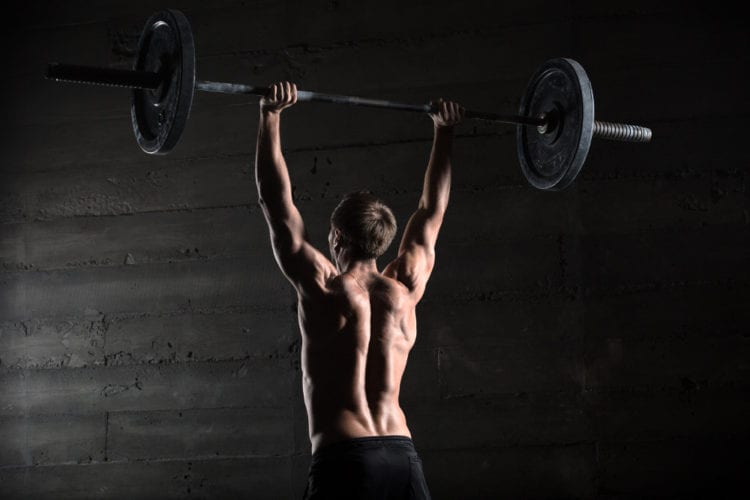 That’s where a technology like heart rate variability fits in because we want to understand where the body is in that continuum.

In stage one, we get the alarm stage. That’s the first part of the training process. That’s where you introduce a new form of stress, new exercises, new methods or a new training program. Because the body has never seen it, it’s new and the work capacity or ability to tolerate it is very low.

Maybe you don’t feel as coordinated, but the next few times you do it, you get much better. Improvements come quickly. That’s because the body is so shocked from what it’s never seen it before, it makes very rapid improvements in coordination and its ability to respond.

That’s where we see long-term improvements in work capacity and the ability to tolerate the activity. You get better. Your fitness improves. Your ability to respond to the exercise or the training program is better. It’s more stable.

That’s the stage where most people get stuck. They end up giving into resistance. They see some improvements, but they keep doing the same thing, and nothing happens.

The reason nothing has happened is because the body has already responded to that stress. It has adapted to it. It sees no reason to improve, so it stays the same.

The reason is simple: The body hasn’t pushed or improved because you’re doing the same thing over and over again.

Some people, on the other hand, know to keep overloading, keep improving and changing the stress, and will repeatedly overload. They’ll see regular improvement.

Eventually they end up pushing into overreaching. This is a further stage down the continuum. This is where the body starts to decrease its ability to respond because it’s being bombarded with so much stress it stops responding to it.

It turns down the sensitivity of the receptors and the muscles that deal with hormones. The body stops responding to them.

What can happen then? The body can do one of two things. It can either crank up the production of those hormones to try to get the response it’s looking for, or it cannot. Initially the body will just compensate for the decreased sensitivity by turning up production.

This is where we start to see negative hormonal patterns. We see too much and the reason is simple: We’ve overloaded the sensors to the point they turned down the sensitivity.

The body’s response to that is to just crank out more hormones.

If you keep pushing through that, you get into an overtrained state. That’s simply where the body stops producing those hormones altogether.

These hormones are not able to produce the needed response because the body has reduced production. The body is doing what it can to survive in the face of what you’ve thrown at it. You’ve thrown too much stress at your body.

If you disrupt homeostasis over and over again, and you’re chronically fatigued, eventually the body is going to figure out how to stop that. This is its attempt. It’s in the heart of why we see overtraining. It’s the body’s compensation to an overload of too much training and too much stress.

People underestimate the impact of mental or life stress on their ability to respond to training. All of life’s stresses play a huge role in how much more stress can be thrown on top of it through training.

If you’re a trainer, coach or an athlete, a lot of this in the past has unfortunately been guesswork.

If you haven’t been using heart rate variability or you haven’t looked at these new technologies, you’ve been forced to guess.

Measuring heart rate variability (HRV) is a fairly new technology designed to eliminate the guesswork, to give you a tool to measure how much impact you’re having and how much life stress is affecting the person.

These two systems work together at the core of homeostasis and allostasis. They’re the “puppet master strings” the brain pulls to make sure homeostasis is always maintained, ensuring the body has the energy it needs.

In looking at these two systems, we can get tremendous insight into what the body is doing, how the body is responding to training and how it’s reacting based on everything the person might be doing.

Each one of those systems will have an impact on the rhythm of the heart rate, but it’s mostly the parasympathetic system that causes variability in heart rhythm pattern.

By looking at that pattern, we can get an idea of how much the parasympathetic system is activated. Very simply, that’s what heart rate variability does: It gives us an idea of what the body is doing, whether it’s under acute stress or whether it’s repairing, regenerating or remodeling from stress.

This tells us a lot about how the body is doing, whether or not the training program is headed in the right direction, headed toward the overreached or overtrained state or right on track.

By looking at how these two systems are functioning and where the balance lies between the two, we can get a very specific idea of where somebody is on the training continuum. We can get a very good idea of what changes we need to make to the program.

Monitoring HRV allows us to make sure we’re pushing when ready for it and not just training hard just to train hard. You want to be always training as hard as you’re ready for.

If you manage the process using a tool like HRV, you can take stock of what’s going on and have a different approach other than just harder is better, more is better. When we look at this more intelligent way to approach programming, we can prevent some of the injuries. We can prolong careers. We can improve performance.

We can do all those things simply by shifting our mindset and using the technology to manage programs to get more out of our athletes and clients.

Joel explains what he learned in two years of experimenting
and describes how he uses HRV with his athletes in his lecture,
The Technology of Heart Rate Variability. 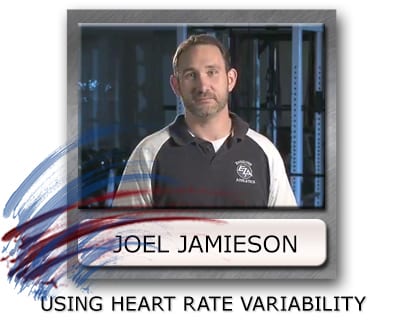 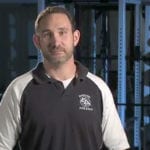 Joel Jamieson is a strength and conditioning coach who specializes in working with MMA fighters. The unique demands of MMA led him in his efforts to learn about HRV, and to help bring it to more coaches, personal trainers and athletes.