Over-Dominant Quads and the Psoas
The large muscular thigh comes to mind when we imagine powerful kicking, jumping, climbing and running.  Athletes, dancers and runners alike recruit this large tissue located in the front of the upper leg for power-sprung motion.  But when does too much quad power become a detriment? When does putting your large quad forward become cause for achy hip sockets, low back pain, and core tension? 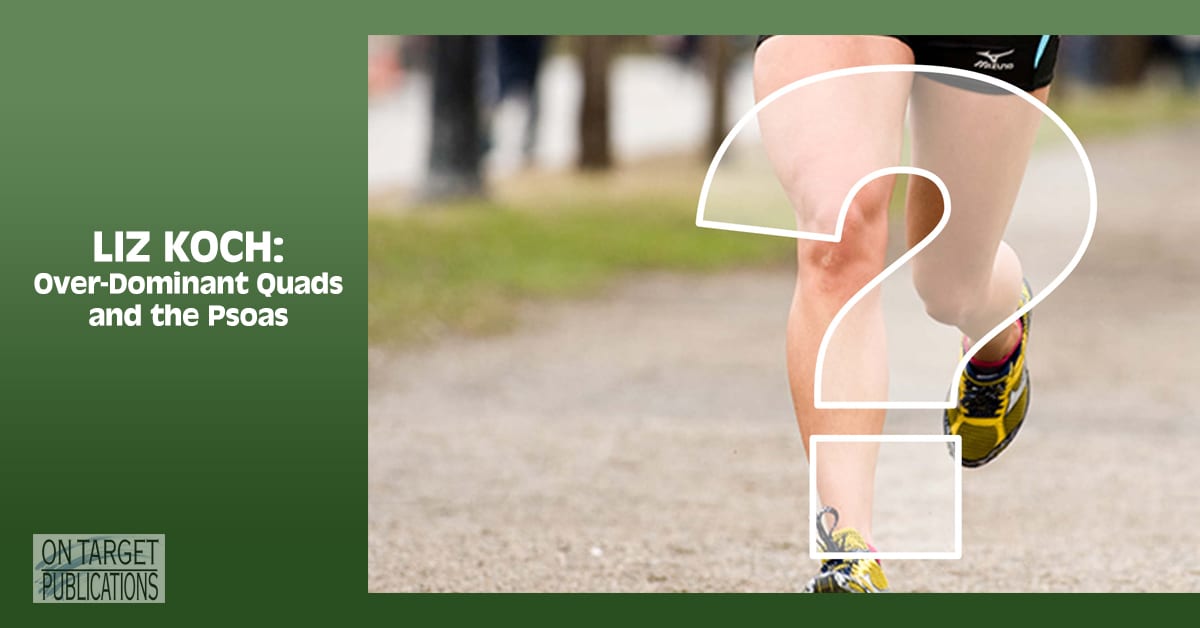 Shifting paradigms offers a strategic way of reshaping the psoas tissue from its defined position as a hip flexor in biomechanics to its rightful place as a neurologically rich messenger of the midline.  Reframing the psoas within the bio-intelligent paradigm of embryology shifts our attention; instead of defining the psoas as a muscle, we recognize its significant role within our core. 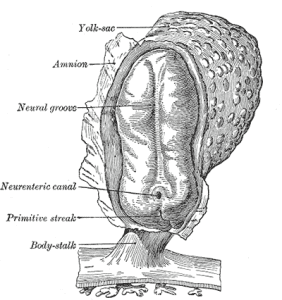 South and North Pole, the midline, or human axis, is a personal force field of organization for all cells, organs and tissue to come into being.

Human beings are biologically defined as spine-based organisms long before arms and legs begin to bud. Even when we think we are just wiggling our toes, all movement emanates from deep within the core midline—our center of being. Therefore, if our goal is to function optimally we cannot simply focus on developing external muscle groups. Instead we must bring our kinesthetic awareness to a deeper level of initiation emerging from within our core.

Embryology helps us to recognize the complexity of the body as a dynamic living process rather than as parts of an object to be fixed. When we engage with this embryological model, we begin sensing life as a complete system inter-relating to all other systems. The human body is no longer isolated, objectified or controlled; it is not a “thing,” but rather an intelligent living system. Humans are an integral being, emerging from a coherent center.

Embryology vs. Biomechanics
There are practical arguments for making this shift in paradigms when examining the quad/psoas connection.  Because biomechanics is a mechanistic paradigm superimposed on a living system, it tends to limit our perception and therefore our creative understanding regarding movement and expression. Too often, the biomechanical paradigm is simplified into concepts, such as “muscle moves bone.”  However, if we recognize that bones are a living matrix, a level of tissue that resonates within the earth’s gravitational field, we tap into a source of sustainable power where all movement emerges from a thriving spine interacting in space and time and movement recycles back into a form of nourishment. Rather than thinking the body wears out, we begin to recognize the regenerative and self-healing capacity that is inherent in living tissue.

Applied biomechanics not only limits our perception of body but also limits the depth of information that may be gleaned from understanding the complexity of the psoas within a larger field of inquiry.  For example, when the core is messaging too much pull from external muscles, the biomechanical perspective might consider counter balance as the solution. It may seem logical to strengthen the psoas to counter balance the pull of the quads; however, the quad, when over-developed, not only dominates the initiation of the movement but also tugs on the entire skeletal system, specifically the pelvic basin.  By pulling the pelvis forward and down, the over-developed quads disrupt the relationship between not only the pelvis and spine but also among the three pelvic bones and the ligaments that weave them together.

When stressed, torn or over-stretched, the proprioceptive rich sacral-iliac joints (SI joints) will cause the psoas to become involved. Disrupted SI joints ignite the psoas, the voice of core integrity, and thus calls out a warning. It is not simply a matter of counter balance; it is a matter of proprioceptive and neurological coherency.  The psoas alerts us whenever our core midline is compromised. Like a GPS system, the psoas picks up and communicates whether or not we are locating in present time and space. Add speed, balance, coordination, precision and intention to the mix and the psoas will signal whenever core coherency is overextended or compromised and vulnerable to injury.

Working with the embryological perspective encourages a much deeper level of conscious initiation. This provides us with the ability to recognize species-specific responses to stress and possibly more intriguing biomorphic patterns that all living systems express as a form of protection in order to survive. By noticing and respecting these responses we have the opportunity to become more functional and better adapt.

[bctt tweet=”It will be at the expense of the whole system if the psoas is recruited as a stabilizer. ~ Liz Koch” via=”no”]

When we think biomechanically, we tend to focus on strengthening muscles to correct imbalances. The psoas is often misused as an anchor of stability. Although counterbalance can at times help to overcome pain and limit dominant muscle responses, it will be at the expense of the whole system if the psoas is recruited as a stabilizer. Engaging the psoas as a stabilizer and thinking of it as a muscle naturally defines it as either weak or strong, which then leads to attempts at releasing the psoas by activating it manually, attempting to lengthen it by stretching, or strengthening it by using some form of repetitive exercise.

Alternatively, when we employ the bio-intelligent paradigm, it immediately becomes clear that the psoas is not weak, but exhausted.  Releasing and stretching an exhausted or inflamed psoas will not create functional tissue. Exhaustion demands a different approach for regaining balance.

Including the embryological paradigm helps to demystify the psoas.  We can recognize that the psoas is not simply a muscle but a bio-intelligent messenger whose message needs to be interpreted. The psoas is an involuntary tissue that is part of the survival response. Trigger point it, pull on it, activate it, and it only exacerbates the exhaustion. Find resolution and it will let down and plump up.  It is a relentless tissue that is part of a powerful fight, flight and freeze response. The psoas will never give up until we solve the message, are dead, or, as is now possible, we choose to surgically remove the psoas.

Spine-Based Movement
The first step to recovering an exhausted psoas should be to stop all misuse of the psoas. In other words, the psoas should not be used to shore up an unresponsive spine, an unstable pelvis, or compensate for disrupted proprioceptive neurology. The skeletal system will need to be nourished, and the pelvic basin balanced so that the organism regains its motility and vital proprioceptive responses.

What does resolve a dysfunctional relationship between the over-dominate quad and the psoas is to stop relying on this dense external muscle and shift our attention to the bone for support. This is not to say that it isn’t valuable to balance muscles in the front, sides and back of the body. Once again, however, it is helpful to switch to the embryological model and return to the concept of being a spine-based organism. 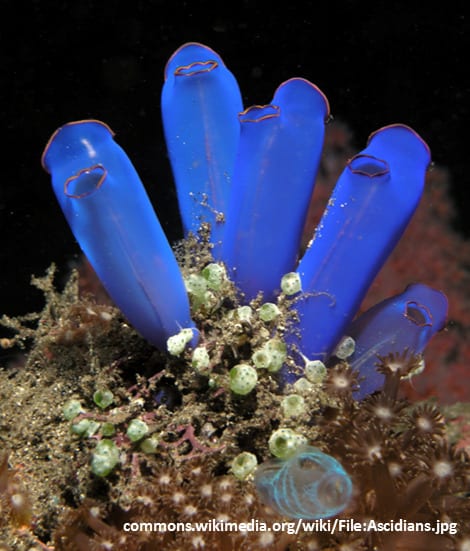 Now think of our organism as being spine-based. Rather than stabilize the core and move the arms and legs like levers, we need to imagine how these vertebrae moved from their core before they became land-based creatures and developed arms and legs. What the sea squirt teaches us is that bone evolved in the ocean and fluid movement enhances our skeletal health.  The idea that the psoas shores up a spine of steel now loses its appeal. What improves neurological proprioception, accurate skeletal weight loading and muscular responsiveness is no longer a rigid core but a supple, dynamic spine that communicates coherent messages throughout the whole network: from our core to our tentacles (which we call arms, hands, and fingers and legs, feet, and toes.)  For communication to reach our toes, we need good proprioceptive signals to emerge from the midline through every skeletal joint.

Ultimately, all tissue then, even the mighty quads, will need to become resilient and capable of shape shifting back and forth from rock hard power loaders to gelatinous fluid tissue.

Unless tissue is resilient, the over-developed quads end up disrupting the conversation and harmony throughout the whole system. Dominant quads do not sense subtle signals available within bone and therefore become constantly activated. If left to their own devises, these large muscle groups overwhelm our ability to receive subtle signals from deep within the core psoas.

Spine-based coherency is a priority if the goal is to organize, balance and coordinate all movement with greater ease and power.

Three ways to gain spine-based coherency:
1) Regain spine-based movement by juicing up the dynamic, responsive psoas. In other mammals, the psoas is called the filet mignon: the most tender tissue carnivores enjoy eating. The juicy psoas has no directional fiber and, like a cucumber, is global, multi-directional, or even non-directional. Keeping the psoas supple means not using it to shore up the spine or to counterbalance ligaments that are damaged. Its role is to signal a profound sense of safety and pleasure.

2) Counterbalance over-developed quads by using the principles of hydrating connective tissue. Use slow, soft, fluid-like micro-movements to plump up and regain muscular motility all the way from the very core midline to the fingers and toes.

3) Enhance proprioception by improving skeletal awareness through good positioning and maintaining centered joints. When we rely on accurate skeletal proprioception, our power comes not from the density of tissue but the neurological resiliency emerging throughout a responsive core.

More on the psoas from Liz Koch and other related content from OTP: 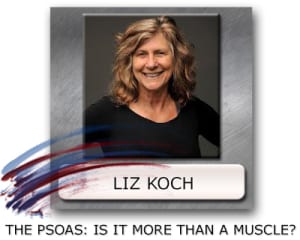 Liz Koch – The Psoas: Is It More Than A Muscle? 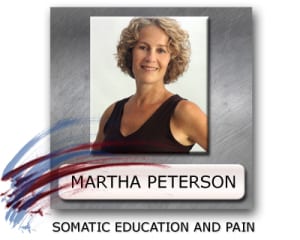 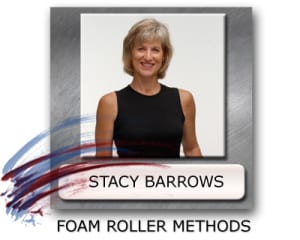 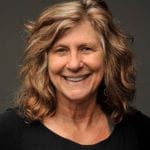 Liz Koch teaches workshops specifically about the psoas, and is the author of The Psoas Book, now in its second edition. After 35 years specializing in the psoas, she also writes for a variety of magazines, including Yoga Journal, Positive Health, Massage & Bodywork, Vegetarian Times, Yoga & Health, Midwifery Today and Massage Magazine.

Liz Koch is an international somatic educator, and creator of CoreAwareness™ with over 37 years’ experience working with and specializing in the psoas. Author of The Psoas Book, Core Awareness; Enhancing Yoga, Pilates, Exercise & Dance, Psoas & Back Pain CD, Unraveling Scoliosis CD and contributing author to Mother, Maiden, Crone: Our Pleasure Playlist, Liz Koch is approved by the USA National Certification Board for Therapeutic Massage & Bodywork (NCBTMB), as a continuing education provider. Her Workshop schedule, free podcasts and articles are available on www.coreawareness.com