Tall-kneeling is an oft-missed step between crawling and half-kneeling and lunging postures. Mark Cheng wants you to give it due attention and tells you what to look for.

Tall-kneeling, being the next developmental stage we’re going to work from, sets up like this. The knees go directly under the hip joints. The knees, hips, shoulders and the head all form one vertical line. I have them all tuck their shirts in—not because I want to embarrass them, but in this particular case, the pant line is im­portant.

What we’re trying to achieve here is to set the hips up such that it’s like the brim of an over-full glass. If you tip the brim in any one direction, the water spills out. From this position, once the rim is set relative to gravity, it will hold the maximum amount of water. If they were to tip forward into anterior tilt, all of the water would spill out forward. For peo­ple who are tight in the hip flexors or quads, this is going to be the default position.

What I’d like for you to do is tilt such that the knot of your shorts, your belt buckle or the front seam of your pants is tilted upward, so the front and the back are totally level. This will be very hard to perceive yourself without a visual feedback tool. Ideally, set someone up with a mirror, so they can see what’s going on.

Want more insight into groundwork progressions and beyond from Mark Cheng? 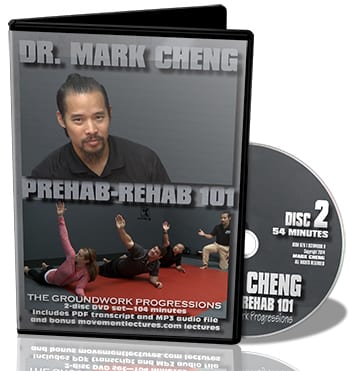 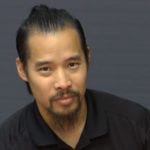