Twice as much work, half as much rest . . . Tracy Reifkind’s ‘Roundabout’ kettlebell swing progression can get you there and beyond.

The ultimate goal is to get to your minute-long sets. Equal work to equal rest.

You can do that by using work-into-rest method or you can just go for it . . . what the heck, it’s your training.

The next goal is to get twice as much work, to half as much rest. So you can be swinging for one minute and resting for 30 seconds. You can do that by doing work-into-rest on a higher scale.

I do that by distraction, by combining all of these swing movements in a progressive way to make them harder. I want my workouts to be hard, not because they are 500 swings, but because I’m doing more one-handed swings or more two-handed swings (as we know, two-handed swings are difficult.)

Eventually, you want to start swinging a heavier kettlebell, right?

How do you do that? How do you start swinging a heavier bell for minutes at a time, especially one-handed? You let go of one of those hands and it’s heavy!

It starts off with a two-hand swing. Now, a two-hand swing is a symmetrical movement. Two-hand swings are great. They are not wonky at all; they always ground you, which is important when you are using a bell that you haven’t swung one-handed before.

I’m going to demonstrate and we’re going to practice it a few times. Here’s the Roundabout. It starts with a two-hand swing, you drop one hand and swing it once and back to the two-hand swing. Drop the other side, swing it once . . . back to a two-hand swing and that’s incorporating all of the swing movements at the same time and increasing your ability to swing a heavier bell, which we will do after we practice the movement.

To learn how Tracy’s kettlebell swing progressions can transform you, continue with Programming the Kettlebell Swing: 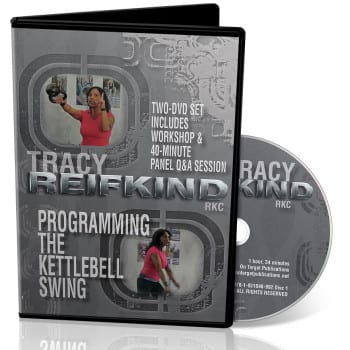 Also available as part of the Reifkind-Whitley-Reifkind bundle: 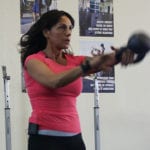