Adam Wolf gives a quick assessment of hip motion in gait, using the pelvis and femur as reference points for bone-to-bone and side-to-side comparisons.

If the left leg is driving forward, I would expect to see this my left hand moving in space a little faster than his other side.

What I really want to do is compare it to the other side. So, we are going to switch sides here. Right foot forward, left food behind and straight ahead, standing tall. As you are doing this at home, get in to the position that the patient you are assessing is in.

Get up in their business.

I can feel a little better. I don’t know if you can see from the camera, but as he drives that right leg forward, I feel like his right pelvis is moving forward faster than his left pelvis, which is the hip motion that I would expect. I think you can probably see that.

If I put my hand on his left femur, you can see that there is some rotation, but it’s not as fast. That would be the normal motion that I would expect to occur here.

Let’s face to your right with your right foot forward. I can look at the sagittal plane as well. I can put my hands on his left pelvis and left femur as he drives that left foot forward. I would expect to see both my hands moving forward in space — but I would expect so see my top hand moving forward faster than my bottom hand — and it looks like it is.

Again, I want to compare it to the other side. Let’s turn around here and put your left foot forward. I’ll put my hands on his right femur and right pelvis. Go ahead and drive forward.

You can see pretty clearly here how my hands are moving at the same speed — he actually wants to flex his knee slightly as he does this. This side is not getting a sequential dissociation.

These are two bones moving in the same direction right here.

If I wanted to do a sagittal plane correction, my assessment (as Gary Gray says “The test is the exercise and the exercise is the test”) is that you’ll keep moving, I’m just going to speed up the top bone a little bit. I’m just pushing the top bone here a little farther forward, faster than the bottom bone. I’m slowing the bottom bone from moving forward in space. Recognize that thought there — I’m not pulling his bottom bone backwards in space. I would expect it to move forward, but I would expect to make it happen slower than the top, so I’m just trying to make that hip motion happen.

This is an excerpt from Adam’s live lecture Improving Fascial Highway Systems –
a hands-on exploration of the interconnectedness of the body:
a framework where bones move, joints feel or perceive motion and myofascia reacts to control the movement,
all while being governed by the nervous system.

Much to be learned from a great teacher. 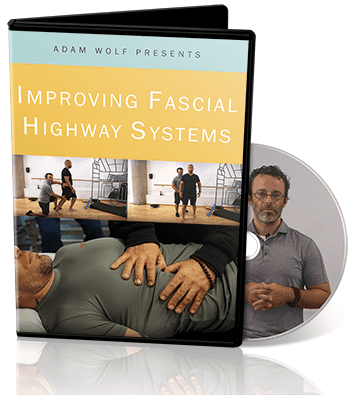 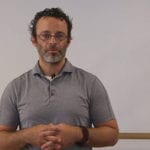 Adam Wolf, PT, LMT, FAFS, is a physical therapist, massage therapist and educator, known for creating innovative and effective treatment paradigms through combining a variety of approaches. He is a Fellow of Applied Functional Science (Gray Institute), Level 3 practitioner of Neurokinetic Therapy (NKT), and is a Master Trainer for Rehab & Reconditioning for ViPR.  His professional career spans nearly two decades and includes clinical management, consulting, education and performance and strength conditioning. His expertise lies in combining manual therapy with three-dimensional movement modalities to address the underlying causes of pain instead of simply treating symptoms.