To Plank Or Not To Plank? Let’s start with four questions.

Is the plank a good exercise?
The only answer is with another question: To achieve what objective or goal? 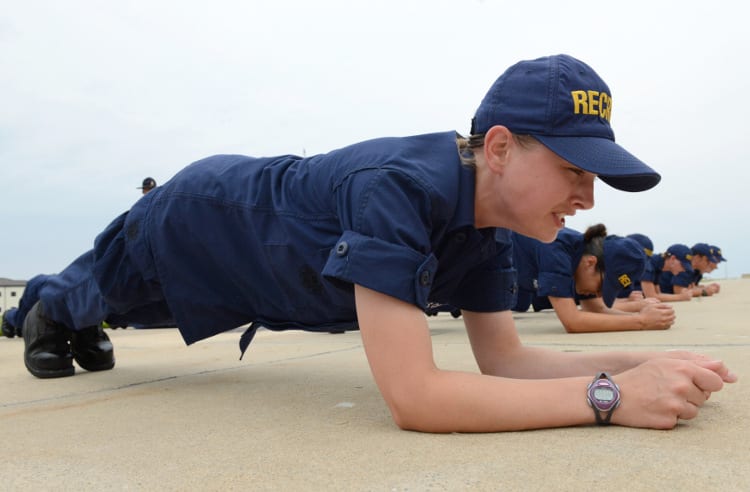 So, does the plank test pillar or core endurance? Some research in low numbers of athletes in Hong Kong indicates it does. If this research continues, with larger numbers and fine wire electromyography, there will be more evidence to support or clarify whether the plank tests core endurance.

Let’s be clear here. The plank, in these studies in Hong Kong, indicates endurance capacity solely for the plank.

At best, we can say that an exercise is good if it achieves its objective. Are we going around in circles? I think we might be. 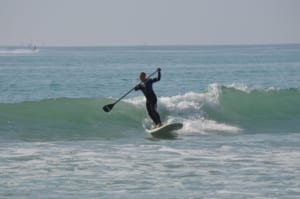 more they do it over time. Is that useful? In some activities it definitely could be. When an individual needs to produce “an immeasurable force applied at long levers against an immovable object” such as in combat sports, the ability to resist trunk extension is desirable. In contact sports where isolated abdominal contractions are required to protect abdominal organs, the ability to absorb blows is desirable—this is more a matter of abdominal muscle bulk/hypertrophy than endurance. In sports where the hand needs to pull down (like paddle sports), the ability to resist trunk extension against long levers, for long periods of time, is desirable.

The research above indicates high activity in the superficial abdominal muscles and superficial back muscles. These are required when high force is required. They are recruited when the stimulus threshold is high. This type of contraction is thus known as a high threshold strategy (HTS) contraction. A HTS contraction is reserved for brief moments of impulse against the trunk. Deadlifting, push ups and punching are good examples.

These impulses are brief. A plank for endurance is not brief.

See the divergence? Endurance requires repeated low-level contractions, for time. Endurance is context specific. Endurance in cyclical tasks (like walking, running, swimming and cycling) requires efficient (meaning low energy use) control of movement. Endurance in non-cyclical tasks (like planking or standing) requires efficient control of position. Here we see another divergence. Standing has forces acting at short levers to axis of rotation to cause postural sway. Planking has forces acting at long levers to cause trunk extension. Different force directions and levers require different contractions. Again we see how the plank is a good exercise to improve endurance of sustained contractions against forces applied at distance from the abdomen.

What are good plank protocols?
So, we come to the second question. If the plank is a good exercise, what is a good protocol? Here we can extrapolate our answer from endurance protocols of cyclical movements (which the plank is not). Spend 80% of your plank training volume in an aerobic training zone—a simple measure is 60-75% HRmax. Then spend the remaining 20% of training volume at max effort. This doesn’t need to be time, it can be load; for example, a weight plate on the lower back. While this measure is not the most accurate indication of energy system use, let’s not get ahead of ourselves with exercise science protocols when the exercise itself is very limited.

I think we can agree that the core, pillar, trunk, hip and shoulder girdle muscles have multiple capabilities. Holding a position for sustained time is one. Producing, absorbing and elastically reusing force is more common. These forces can occur at long or short distances from the core/pillar. These forces usually occur intermittently. I would argue the core/pillar muscles control dynamic force changes to provide a stable base for the upper and lower limbs to position themselves to reflexively execute a skill, with low or high forces as required.

To provide evaluation of the efficiency and capacity to provide a stable base against changing forces in an upright position, a better test for postural endurance capacity are the loaded carries. Measure the time and distance carried for a particular weight, and there’s your baseline to measure improvement.

To provide evaluation of the efficiency and capacity to provide a stable base against changing forces in a horizontal position, a better test for postural endurance capacity is the Upper Quarter Y Balance Test. There’s more to this test than meets the eye. That’s for another article, but briefly, the ability to stabilize the body on one arm and two legs (like a ¾ plank on hands) while moving the other arm as far as possible in three directions without falling for approximately 10 seconds; well, that requires tremendous control of posture. That will reveal more about limitations and asymmetry than a static position. That brings us to what the plank is good for.

If you’re going to evaluate capacity of motor control using the UQ-YBT, you should at least clear being capable of being in the plank position for 10 seconds. Given it’s a one-arm plank, the side plank should be clear for 10 seconds—this clears someone to progress to do the Upper Quarter Y Balance Test.

So, what’s a better exercise? For what purpose? Core control?

Remember, control of the core/pillar/trunk/hips/pelvic girdle/shoulder girdle is context specific—the control required changes with speed, direction, start and end positions and presence of pain or fatigue.

As for core exercises, we’ve already established control of the core changes with context. It’s also reflex driven. So underlying mobility and absence of pain ensures the nervous system at least is sensitive to the challenges of the exercise to drive reflex control. That can be done in many positions, through many patterns, with many changes of force. For this, the plank does not serve a purpose, but a positional stepping stone for other evaluations and exercises that reveal weak links in the “low threshold strategy with intermittent appropriate contraction of global muscles”.

Some of these exercises/evaluations include, but are not limited to: 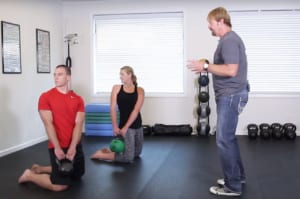 –Supine to prone and vice versa; quadruped static and dynamic diagonals in flexion and extension with or without rotation,
–Half and tall kneeling trunk/hip flexion/extension/rotation with and without load and speed; e.g. chops, lifts and med ball tosses/rotations.
-Transitions through these first three postures such as the Turkish get up; split stance, single leg stance and bilateral stance movements.

They all require transmission of force through the hips/pelvis/trunk to shoulder girdle—i.e. the core or pillar. Including the standing postures, we get:
The carries, hip hinge lifts, cleans, snatches, jerks, squat, lunge, step, climb, transition from sit to stand. These all involve moving from one position to the next. They all involve girdle-core-girdle. They all involve reflexive control of forces in one or more planes of movement. As such, they involve the core/pillar.

At this point, I can state that the plank is a transitional test on the way to other evaluations. From there, corrective or conditioning exercises can be prescribed.

Who’s right and who’s wrong about planks?
In a discussion piece like this, it’s about opinions. In an argument, opinions matter less than evidence. They still matter, since opinions backed up by extensive clinical or training experience are refined and tend towards robust, but they matter more with objective evidence. This isn’t a contest for who has the most qualifications or experience, and thus whose opinions matter more.

If you’re going to use the plank to improve characteristics of human competency and capacity, objectify it. Measure it. Prove you moved the needle. Explain just what that needle is measuring. Ensure, as best as possible, that measure relates to something important. For example, a plank test for time tells you how long you can hold a plank test for. Training the plank as an exercise tends to increase planking time. Training the plank with awareness, with active contractions of certain muscles tends to increase the organization and concentration of activity in the nerves of that area of the brain responsible for activating those muscles. Whether ability in the plank relates to health, functional competency of movement or capacity of movement is a much better question.

The evaluations and exercises offered above, in addition to the plank, can be described as more functional if we can define what we mean by function.

I use this definition: Function is the ability to adapt to internal and external stimuli.

In that regard, a plank develops a strong cortical organization of neural afferent-efferent-awareness-and-drive—the “mind-muscle” reference used by some. There is a lot of evidence to indicate cortical reorganization occurs with isolated training, which the plank tends towards. Isolated training recruits high EMG relative to externally focused, task-focused training, which recruits lower EMG but incorporates more efficient context-specific patterns, often with higher torque than isolated. If that strong isolated recruitment is of value for combat and contact sport athletes, perfect. It’s contextual. For athletes who don’t need such isolated activity, but who still need anti-trunk flexion, or anti-separation of trunk-pelvis (runners/swimmers), the addition of posture/force-specific limb movements demand progression beyond cortical organization, to incorporate context-specific patterns.

The plank fails to provide the stimulus for this element of training.

But, it does provide a stepping stone, as discussed above.

More from OTP on using the plank in your programming: 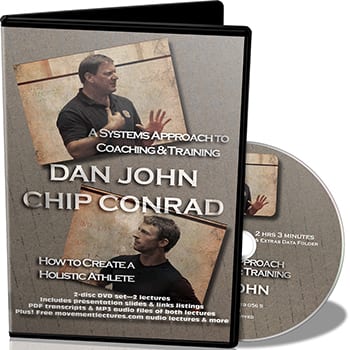 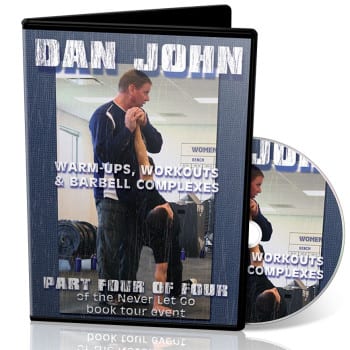 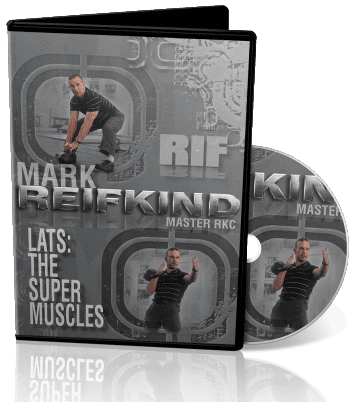